For a fleeting moment as she slowed into the final flight, it looked like Honeysuckle’s unbeaten record was in danger. But she showed a dogged attitude to rally and win the Grade 1 Champion Hurdle at Punchestown on Friday.

For much of the contest it had looked like Kenny Alexander’s mare would record a facile success, only to allow the Willie Mullins-trained Sharjah back into the contest as her five- length margin fell dramatically approaching the final hurdle.

Once over it, she found something extra to win by two and a quarter lengths, much to the relief of trainer Henry de Bromhead. It was a performance that saw her record a 12th straight victory in a row and her eighth at the top-level.

He said: “She’s just amazing. A lot of those really good horses just have a real will to win. She’s a queen and I just feel incredibly lucky to have her. It was brilliant.

“You’re always under pressure when she’s running, but today I was kind of going ‘well, we haven’t been having an amazing week so far’, so I didn’t know what to expect. With her, though, she’s just so good. She always gets us out of trouble one way or the other. She’s amazing.”

Jockey Rachael Blackmore added: “It’s fantastic to cap it of here at home at Punchestown, it’s incredible. It’s such a shame there’s no crowd here to see her, but hopefully everyone enjoyed it at home.

“I just committed her far too soon, I think, and we didn’t have a lot of petrol down at the last. I doubt the picture was too pretty, but she dug deep after it and pulled it out of the bag like she always does.
“She jumped the second- and third-last well and just delivered on the day. It wasn’t a flowing race for me. It wasn’t smooth everywhere, but she got the job done.”

Paul Townend sealed a fourth Irish jockeys’ championship when he guided Gaillard Du Mesnil to victory in the Grade 1 Champion Novice Hurdle, a contest which lacked the impressive Bob Olinger due to coughing.

It was Townend’s fifth winner of the week, and he said: “It feels brilliant. I’ve been doing a bit of sweating for the last couple of weeks. I’m riding for the champion trainer so I’m probably supposed to be champion jockey, it’s nice to be that.

“Especially with the momentum Rachael had coming out of Cheltenham and then when I saw her do what she did at Aintree, everything was happening for her. It’s a game that you have to ride your luck a bit in and I was lucky enough to have the support of Willie and his team.” 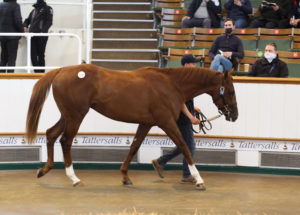