Hats off to Cloth Cap after Ladbrokes Trophy romp
Stories

Envoi Allen and Honeysuckle were the star turns on a superb afternoon’s racing at Fairyhouse on Sunday, each tasting Grade 1 glory to preserve their individual unbeaten records.

British-bred mare Honeysuckle won her ninth race in a row under Rules by successfully defending her crown in the Grade 1 Hatton’s Grace Hurdle (2m4f).

Cracking Smart and Jack Kennedy led the six-runner field at a steady pace but Rachael Blackmore had Honeysuckle in an excellent position just behind the leader.

Taking up the running three out and given the office approaching the final flight, Honeysuckle galloped on strongly on her seasonal return to hold off the fast-finishing Ronald Pump by half a length.

Honeysuckle, bred by Dr Geoffrey Guy at Doug Procter’s The Glanvilles Stud and trained by Henry de Bromhead for Kenny Alexander, is sure to be targeted at the Cheltenham Festival in March, having captured the Grade 1 Close Brothers Mares’ Hurdle at Prestbury Park this year.

Nine from nine under Rules coming into the Grade 1 Drinmore Novice Chase (2m4f), Envoi Allen was soon sent to the front by Jack Kennedy in the four-runner contest.

Assemble and Rachael Blackmore briefly looked a threat two fences from home but once asked to put a seal on matters, Envoi Allen powered away from his rivals to record a bloodless eight and a half length triumph.

Trained by Gordon Elliott for Cheveley Park Stud, who earlier in the afternoon combined to take the Grade 1 Royal Bond Novice Hurdle with Ballyadam, Envoi Allen will be feared in whichever contest he turns up in at the Cheltenham Festival in March.

Carlisle staged the Listed Houghton Mares’ Chase (2m4f) on Sunday and My Old Gold, trained by Nicky Richards for Tor Side Racing, produced a fine round of jumping to defeat Chilli Filli by a length and a half under champion jockey Brian Hughes. 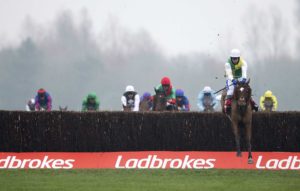 Up Next
Hats off to Cloth Cap after Ladbrokes Trophy romp