Having conquered the Cheltenham Festival last month, Rachael Blackmore left an indelible mark on the Aintree turf on Saturday when partnering Minella Times to a famous victory in the Grade 3 Randox Grand National, becoming the first woman to ride the winner of the world’s most famous horserace.

It was also a significant result for trainer Henry de Bromhead, fresh from his six-winner haul at Cheltenham, who saddled the first two home, with 100-1 chance Balko Des Flos chasing home his better fancied stablemate.

Minella Times, owned by JP McManus, who was enjoying his second National triumph after Don’t Push It in 2010, was soon in a good position under Blackmore, settled behind the leaders on the inside in the first dozen, as Jett and Sam Waley-Cohen established a clear lead. Favourite Cloth Cap travelled well under Tom Scudamore in a prominent position but started to backpedal inside the final half mile and was eventually pulled up.

Jett was still in front after jumping three out but the pack, led by Minella Times, closed rapidly rounding the turn for home. Minella Times jumped the second last in the lead, chased hard by Balko Des Flos, Burrows Saint and Any Second Now, and history beckoned.

An excellent jump at the final fence put Minella Times firmly in control. Blackmore asked her mount to kick on at the elbow and Minella Times didn’t disappoint, staying on strongly to defeat Balko Des Flos by six and a half lengths, with Any Second Now, like the winner owned by JP McManus, a length and three-quarters back in third, 19 lengths clear of fourth-placed Burrows Saint.

Of the first 11 horses home, ten were trained in Ireland – a disappointing result for British-trained runners following the whitewash at the Cheltenham Festival that saw the Irish return with 23 winners from 28 races. 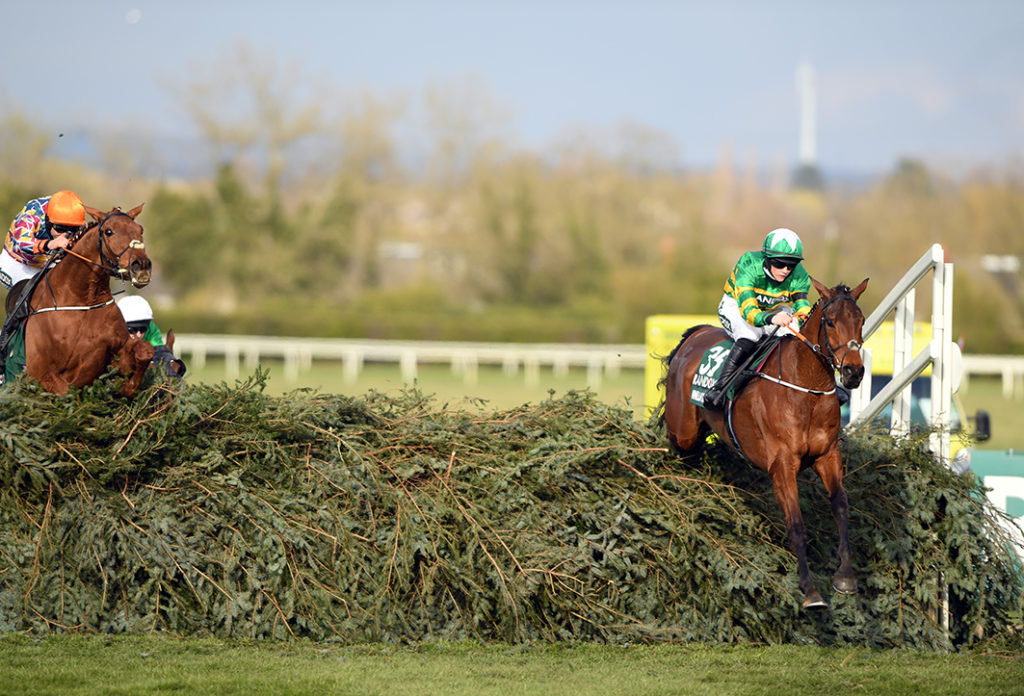 Blackmore said immediately after the race: “I cannot believe it! He was a sensational spin. I’m so lucky to be riding him. It’s unbelievable! He jumped beautifully. I tried to wait for as long as I could. When we jumped the last and I asked him for a bit more he was there. I don’t feel male or female now; I don’t feel human.”

Talking to ITV Racing later, Blackmore continued: “I never imagined I would get a ride in this race, let alone stand here looking at this trophy! I thought jumping the second last I was going well, and I let myself think I would win when I heard the commentator say I was four lengths clear [on the run-in]. I can’t put into words how it feels.”

De Bromhead said: “She was brilliant on him. She hardly left the rail. I’ve been watching this race since I was a kid. It’s so lucky and the stuff you dream of. Rachael is brilliant. We’re so lucky to have her. They broke the mould with her.”

Fifteen of the 40 runners completed this year’s Randox Grand National. There was a sad postscript to the race for the successful owner when it was announced that The Long Mile, trained by Philip Dempsey, had suffered a fatal injury.

Richard Kelvin Hughes has bred and owned some top-class runners over the years and looks to have a potential superstar on his hands in the handsome shape of My Drogo, emphatic winner of the Grade 1 Betway Mersey Novices’ Hurdle (2m4f) for the team of Dan and Harry Skelton.

On his first run over two and a half miles, the rapidly progressive six-year-old travelled with purpose in midfield and was still hard on the bridle turning for home. Slick jumps at the final two obstacles saw the son of Milan establish a healthy advantage over his rivals and he galloped on strongly to defeat Minella Drama by nine and a half lengths.

Harry Cobden took a crashing fall from Lucky One in the contest and was later stood down for the rest of the card, missing the Grand National ride on Give Me A Copper for boss Paul Nicholls.

My Drogo is out of Kelvin Hughes’ talented mare My Petra, a daughter of Midnight Legend who won on the Flat, over hurdles and fences, gaining her biggest victory in the Grade 2 Amlin 1965 Chase at Ascot.

Kelvin Hughes said after the race: “He’s still raw and growing. This track was easier to go two and a half miles than Cheltenham. When you breed them yourself it’s twice as exciting, but then you are twice as nervous!”

My Drogo will likely be set for a novice chase campaign next season with the Cheltenham Gold Cup a long-term goal.

The Nicky Henderson-trained Shishkin was big odds-on to add the Grade 1 Doom Bar Maghull Novices’ Chase (2m) to his Grade 1 Arkle Chase Trophy success at the Cheltenham Festival and duly landed the prize without looking at his brilliant best.

Nico de Boinville was unhappy with the pace Gumball and Tom O’Brien were setting in the two-mile contest and sent Shishkin to the front before halfway, keen to ensure a proper test and put his four rivals under pressure.

Funambule Sivola emerged as the only possible danger in the home straight and while he briefly threatened to throw down a meaningful challenge after a good jump at the final fence, Shishkin held too many guns. The seven-year-old crossed the line three and a quarter lengths clear of Funambule Sivola, providing another top-level strike for owners Joe and Marie Donnelly, whose colours have been carried with distinction by dual Cheltenham Gold Cup victor Al Boum Photo. 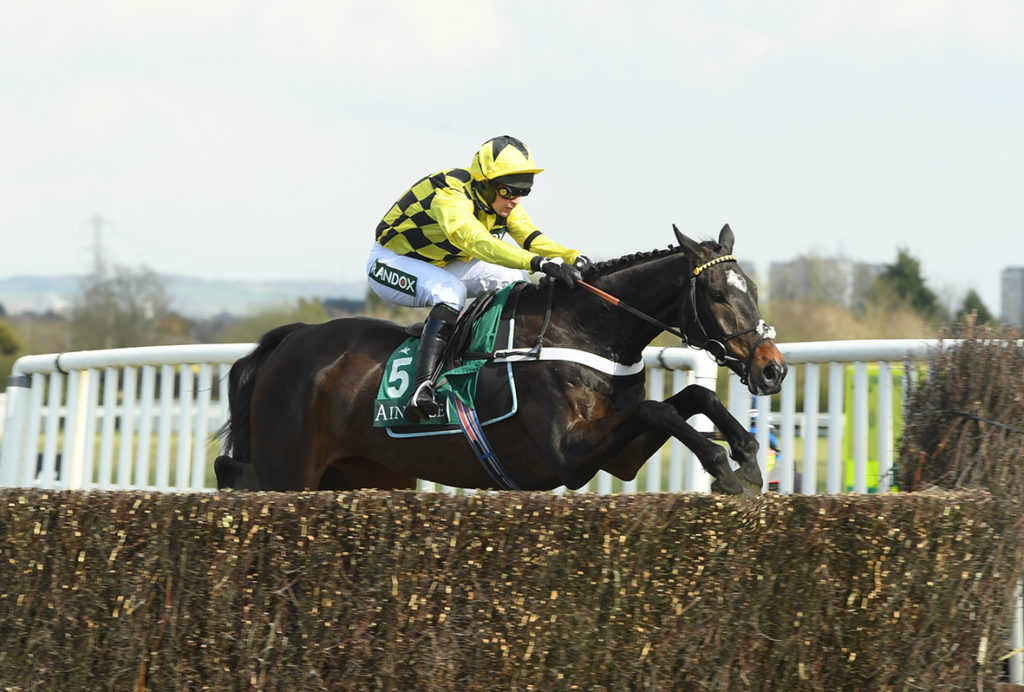 Thyme Hill showed his battling qualities to edge out Roksana in the Grade 1 Ryanair Stayers’ Hurdle (3m½f) under Tom O’Brien, who inherited the mount at Philip Hobbs’ stable following the retirement of Richard Johnson.

Vinndication quickly established a significant lead under David Bass but the petrol gauge starting to flash red turning into the home straight.

A host of runners were in with a chance between the final two hurdles and it was Roksana and Harry Skelton that made their bid for glory first, challenging on the inside of the track.

However, a sloppy jump at the final flight made life more difficult and O’Brien roused a strong challenge from Thyme Hill that saw the seven-year-old edge past the mare on the run-in and score by a neck, with Thomas Darby four and a quarter lengths back in third.

Kim Bailey and David Bass teamed up to good effect with Happygolucky, emphatic winner of the Grade 3 Betway Handicap Chase (3m1f). The winner, owned by Lady Dulverton, jumped well and ran on powerfully to defeat Johnbb by two and three-quarter lengths.

Stuart Edmunds enjoyed a big-race winner when favourite Hometown Boy obliged in the opening contest on Grand National day, the Grade 3 EFT Systems Handicap Hurdle (3m½f), under Ciaran Gethings. The improving six-year-old gelding, now the winner of two of his seven races under Rules, is owned by The Garratt Family and looks a hurdler to follow. 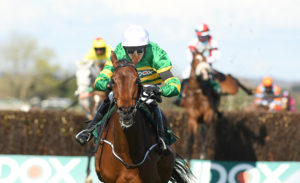 Up Next
Deserved Marsh Chase success for Fakir D’Oudairies