Ryan Mania couldn’t have summed up his weekend better than when he ended a tweet from hospital on Sunday night with the hashtag ‘highs and lows’. Even that, however, is an understatement.

Twenty-four hours earlier, after winning the 166th running of the Grand National aboard 66/1 shot Auroras Encore, the 23-year-old was being feted by racing fans around the world before being led onto the pitch at Galashiels Rugby Club and given a hero’s welcome in the Scottish Borders town of his birth, where egg-chasers greatly outnumber steeplechasers.

If Mania’s demeanour at the post-Grand National press conference was anything to go by, he will have taken his crashing fall to earth on Sunday, from the back of hurdler Stagecoach Jasper, with the same charm and humility he displayed after his career-defining victory. When asked how he would be celebrating on Saturday night, he replied, “I won’t be doing much, I’m riding at Hexham tomorrow.”

Refreshingly, it wouldn’t occur to Mania to indulge in the wild celebratory antics that are becoming increasingly widely deployed by his colleagues. He allowed himself a smile immediately after reaching the Grand National winning post, then, as the numbing shock at what he had just achieved started to register, he remained almost expressionless while the carnival continued around him, occasionally lifting his hand almost timidly to acknowledge the roars of the crowd. In an instant, the unassuming young man endeared himself to the 600 million viewers around the world who tuned in to watch his moment of glory.

Most of those will not have been watching the action from Hexham the next day, but for the many racing fans closer to home who can now keep a close eye on the sport they love from wherever they are thanks to various social media networks, the news of Mania’s dramatic airlift to hospital will have been greeted with a flipping over of stomachs and fervent prayers that the jockey would be spared the severity of injury so cruelly dealt to his weighing-room colleague JT McNamara at the Cheltenham Festival. Happily for the Mania family, Ryan’s injuries, though not fully disclosed at present, do not appear to be too serious.

The Grand National is famed for the fairytale stories surrounding its winners, though this was a twist few would have predicted and none would have welcomed. On the big day itself, however, the country’s most iconic race passed largely free of incident, a welcome relief not just to the team at Aintree and the BHA but to everyone with an emotional investment in horseracing.

For two days, our sport had been kicked about the airwaves and cyberspace by those only too eager to see it sidelined for good, the ignorance of some of the arguments put forward almost too depressing to bear.

Thankfully, the sensible liaison between organisers and RSPCA advisors which led to further modifications of the course, including new Easifix centres to the now more malleable fences, appear to have worked.

Not only that, they seem to have been backed wholeheartedly by the race’s participants, with the famously outspoken former international show jumper Harvey Smith, husband of the winning trainer Sue Smith, going as far as saying, “All the horses have come back in one piece and that is a bonus. Aintree, Lord Daresbury and the RSPCA have done a first-class job, they have tried their best. This race will go on forever. People love this race, it goes out worldwide – you can’t beat it.” 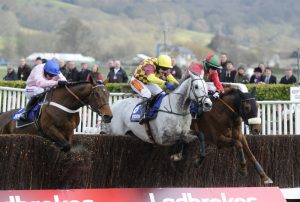 Up Next
Death of season’s leading NH sire