The bloodstock world and Coolmore Stud have been dealt a major blow with the death of High Chaparral, who was euthanised at Fethard Equine Hospital after exploratory colic surgery revealed he had suffered a perforation to his intestine.

Having become a Group 1 winner at two with victory in the Racing Post Trophy, the son of Sadler’s Wells delivered back-to-back Derby victories for both his sire and the team at Ballydoyle when winning Epsom’s blue riband in 2002, before going on to score in both the Irish Derby and the Breeders’ Cup Turf at Arlington Park.

Demonstrating both his versatility and toughness, he remained in training at four, with his victories that year including the Irish Champion Stakes and a second triumph at the Breeders’ Cup when dead-heating with Johar at Santa Anita.

Retired to stud in 2004 for a fee of €35,000, his tally of Group 1 winners to date stands at 11, including his Irish-bred sons Wrote, Wigmore Hall and Toronado, while in the southern hemisphere – where he stood initially at Windsor Park Stud in New Zealand before switching to Coolmore Australia – he has been responsible for the outstanding 10-time Group 1 winner So You Think, as well as Dundeel and Derby winners Monaco Consul and Shoot Out.

So You Think, who, like his sire, also shuttles between Ireland and Australia, was represented by his first foals in Europe this season, while Dundeel joined the ranks at Arrowfield Stud earlier this year and Toronado is set to take up stallion duties at the National Stud in Newmarket in 2015.

As a broodmare sire, High Chaparral scored a major breakthrough this year via his daughter Muravka, who is the dam of Prix Morny winner The Wow Signal, while another of his daughters, Queen Cha Cha, has produced recent Group 2 Matriarch Stakes winner Suavito in Australia. 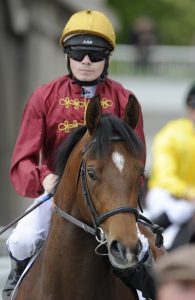 Up Next
Jamie Spencer to continue riding career