Here Comes When comes in

The big match-up in the Qatar Sussex Stakes, the highlight on day two of the Qatar Goodwood Festival, failed to materialise as dual Guineas hero Churchill was ruled out of the £1 million contest due to heavy rain that left the going testing.

Godolphin’s Ribchester, sent off at 8-13, appeared to have a simple task in the Group 1 event yet the underfoot conditions also did for him as 20-1 chance Here Comes When under champion jockey Jim Crowley relished the ground to grind out a neck success over the odds-on favourite. Lightning Spear was three-quarters of a length away in third with French raider Zelzal in fourth.

Confirmed mudlark Here Comes When, trained by Andrew Balding for Jim and Fitri Hay, was recording his first victory at the top level at the age of seven. Balding said the gelding was “stones better” on soft ground, having finished fourth in the 2015 renewal on a quick surface.

The Group 3 Molecomb Stakes went to the Karl Burke-trained Havana Grey and PJ McDonald. The son of Havana Gold was taken to the stands’ rail and made every yard of the running for a convincing success over Invincible Army.

Joe Fanning recorded another Goodwood victory for boss Mark Johnston on Londinium in the competitive 12-furlong handicap, while Josephine Gordon partnered Cool Sky to a 25-1 success in the opening 2m4f handicap for trainer Ian Williams. 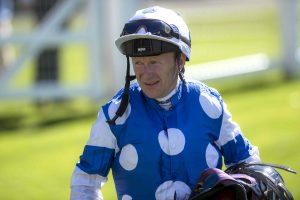 Up Next
No ordinary Joe