Hennessy sponsorship at a close

British Racing’s longest commercial sponsorship is due to come to an end after Hennessy confirmed it’s decision to pull out of the race it has been connected with for 60 years.

The first running of the Hennessy Gold Cup took place at Cheltenham in November 1957, and was won that day by the great Mandarin with a first prize of £5,272.

Since then, the race has thrown up some truly outstanding weight carrying performances down the years, with Arkle winning the three and a quarter mile contest twice with 12st 7lb on his back each time.

Burrough Hill Lad carried 12st to victory in the 1984 renewal, while more recently the Paul Nicholls-trained Denman delivered in spectacular fashion in 2007 and 2009 with the burden of 11st 12lb.

Just two years ago, the Trevor Hemmings-owned Many Clouds became the first horse to win both the Hennessy Gold Cup and the Aintree Grand National.

“For anyone with even a passing interest in Jump racing, The Hennessy Gold Cup has been a race that has captured the imagination,” said Dominic Burke, Chairman of Newbury Racecourse. “It has helped to identify future stars, confirmed existing champions and produced as much emotion and excitement as almost any other race in the calendar.”

He continued: “We are enormously grateful to several generations of the Hennessy family and the company’s management team for their wonderful support of such a special event, but everything comes to an end at some point and it is fitting that the sponsorship is drawing to a close after such a thrilling race to mark the 60th Hennessy Gold Cup as the highlight of two wonderful days of top class Jump racing last month.”

In what turned out to be the 60th and final race under the current sponsorship, Native River put up a gutsy display under champion jockey Richard Johnson to claim the £113,000 prize. In so doing he was giving his trainer and rider their first wins in the race.

The Hennessy Gold Cup was one race however that alluded 20-time champion jockey AP McCoy. The closest he finished was third and he did so on four separate occasions.

Jo Thornton, managing director of Moët Hennessy UK, said: “Hennessy has enjoyed 60 wonderful years of sponsoring The Hennessy Gold Cup. Over the decades, the race has been won by many extraordinary and courageous horses, jockeys and trainers.”

He added: “We are enormously grateful to the directors and team at Newbury, who have always delivered racing of the highest quality, at one of the UK’s most iconic racecourses.”

Ladbrokes are speculated to be in line to takeover sponsorship of the race, despite controversy surrounding racing’s ABP policy. 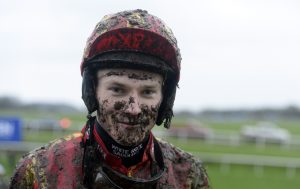 Up Next
Golden whip destined for Reveley