Sam Thomas: moving to Wales has been the making of me
Stories

British-bred Constitution Hill looks another superstar for the Nicky Henderson stable as the ultra-progressive five-year-old continued his education with a facile success in the Grade 1 Tolworth Novices’ Hurdle at Sandown on Saturday.

Sporting the silks of owner Michael Buckley, associated with top-class performers Finian’s Rainbow and Beat That, Constitution Hill was making just his second start under Rules, having graduated from a point-to-point second at Tipperary by taking a novice hurdle at Sandown by 14 lengths last month.

While the ground was much softer on Saturday, the Blue Bresil gelding handled the heavy going with aplomb, travelling powerfully under Nico de Boinville throughout the two-mile contest. The duo eased past front-runner Jetoile and Lorcan Williams jumping two out and a superb leap at the final hurdle sealed the deal, as Constitution Hill passed the post 12 lengths clear of Jetoile.

Speaking from home, Henderson said after the race: “For obvious reasons we couldn’t be there at Sandown today, which was sad, and I hate to tell you that it’s even worse watching it from home. It’s somehow even more nerve-wracking than when you’re there!

“But what we saw was better than any medicine – that’ll kill Covid I can tell you, watching something like that. He was spectacular! We hoped he might be.

“We didn’t know about the ground. There had been a lot of hype from one run but he’s an extraordinary horse and just to go round there and do that was frightening, to be honest with you.

“We’re just very lucky boys in that we have Jonbon as well, who in fact is the absolute opposite to this horse. Jonbon is a hyperactive busybody who is always on his toes and this fella, Constitution Hill, is about as laid back as any horse I’ve ever come across.

“Even JP [McManus, owner of Jonbon] has very kindly just rung and said good luck and well done to Michael [Buckley] and ourselves.

“If they meet at Cheltenham then so be it, they will have to do so. We’re just very lucky to have two horses like them.

“That was just fabulous today. Nico did everything right and he went in the ground, and I’m thrilled for Michael Buckley. He’s been with us for years and I think that’s the third Tolworth Hurdle we’ve had for him.

“Let’s just hope that the future shines for this horse. He could be enormous but as everyone knows you need an awful lot of luck on your side for things to go forward but the future looks bright.”

Also at Sandown, the Lucy Wadham-trained Martello Sky captured the Listed 2m4f mares’ hurdle for The Sky Partnership under Aidan Coleman, while the Evan Williams-trained Prime Venture, owned by Janet Davies, recorded a decisive success in the three-mile veterans’ chase. 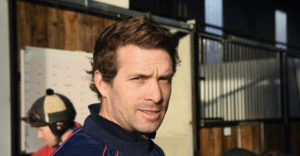 Up Next
Sam Thomas: moving to Wales has been the making of me