Heartbreak City pours it on in Ebor romp

Europe’s richest handicap over 1m 6f has thrown up plenty of surprises in recent years none more so than 12 months ago when outsider Litigant triumphed for Lambourn-based trainer Joseph Tuite.

It has also given a chance for lesser known jockeys to shine with the likes of Louis Steward and Dale Swift scoring in two of the past five running’s.

This was to be the case again this year as apprentice Adam McNamara partnered the Tony Martin-trained Heartbreak City to a facile success on the final day of the Ebor festival, with apprentices filling the first three placings.

The 20-runner field was taken along by the Rod Millman-trained Havana Beat who set honest fractions in the visor and pinched a five-length advantage.

As the gelding came back to the field over three furlongs out, Northumberland Plate runner-up Seamour kicked for home for local trainer Brian Ellison. However, he was quickly followed by the smooth travelling Heartbreak City who took it up inside the final furlong and once asked stretched clear of Shrewd and stable mate Quick Jack, to secure a comfortable four-length victory.

For 19-year-old McNamara who is attached to Richard Fahey’s yard this success is by some way the biggest of his career so far.

His 5lb claim has proved a popular choice in the north and the Irish-born talent has enjoyed a fine season having ridden 32 winners this calendar year, lying fifth in the apprentice jockeys’ championship.

“I was tracking that Seamour and I thought about the two pole I knew I was going to win,” reflected McNamara.

“If I could tell you one race I wanted to win this is it, I’ve been coming here with my family for the last three years and I was with Johnny Murtagh when Mutual Regard regard won so it means so much to me I can’t explain.”

County Meath-based Martin has targeted the Ebor in recent years with the likes of Ted Veale and Salute Him, the latter having achieved the best result for his handler when finishing fourth in the 2010 renewal under legendary jockey turned trainer Johnny Murtagh.

Martin said: “The young man on him was just sheer brilliant two down Lester Piggott wouldn’t be as good.

“Poor old Jack threw his head coming out of the stalls and missed seven or eight lengths so credit to Oisin he gave him a lovely ride.”

Earlier in the afternoon, Scottish got his head in front for the first time at Group 3 level in the Betfred Strensall Stakes for trainer Charlie Appleby.

The four-year-old gelding sat in a handy second throughout much of the contest under William Buick after breaking from a wide berth.

The duo took the lead just over two furlongs out from Custom Cut and kept on in determined fashion to claim the prize by just over a length.

The two-year-old’s took centre stage in the Group 2 Gimcrack Stakes, a race won in recent years by the likes of Showcasing and top-class sprinter Muhaarar. This year’s renewal looked to unearth another star in the shape of Godolphin’s Blue Point who ran out an impressive winner.

The son of Sharmardal was never too far off the leaders under Buick and once asked for his effort within the final furlong and half, shot clear of his nearest rival Mokarris to win by three-lengths. 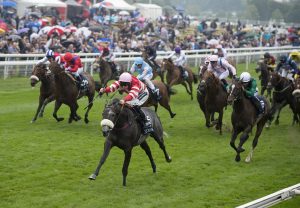 Up Next
Local star shines again on the Knavesmire