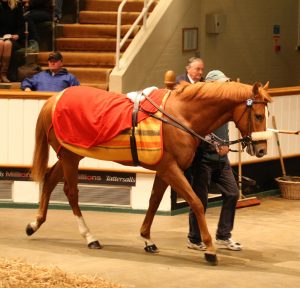 A Danehill Dancer colt topped the first day at 170,000gns

Peter and Ross Doyle signed for the top lot, a Lynn Lodge Stud-consigned Danehill Dancer half-brother to Group 2 winner Hatta Fort, who had been sold by his breeder Wellsummers Stud for 52,000gns as a yearling.

Hillwood Stud led the way for British consignors when selling a 160,000gns son of Oasis Dream to Blandford Bloodstock on behalf of Sheikh Sultan bin Khalifa Al Nahyan. The colt, who is the first foal out of the Red Ransom mare Matroshka, is to be trained by David Simcock.

Seven lots breached the six-figure barrier, with the most expensive filly being Mocklershill’s daughter of Shamardal out of the unraced Oregon Trail, who was bought for 140,000gns by Jamie McCalmont.

The only lot in the sale by the recently-deceased Montjeu, a colt who hails from the family of Alexandrova and Magical Romance, was knocked down for 100,000gns and is now on his way to Germany having been bought by agent Peter Brauer, trading as Panorama Bloodstock Services.

Just as last year, Mocklershill occupied the top vendor slot, with nine lots sold for a total of 641,000gns, while the Doyles were the leading buyers, having signed for four lots at a cost of 401,000gns.

The sale continues at 6.15pm on Thursday. 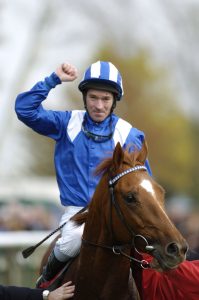 Up Next
Haafhd’s purple patch continues