Hats off to Hatta

The hand of racing history has rarely tapped Brighton on the shoulder. But 40 years ago, on June 20, 1977 the seaside track wrote what was to prove a significant entry in the annals.

Second event on the afternoon’s programme was the Bevendean Maiden Stakes for two-year-old-fillies over an extended five furlongs, with £968.60 going to the winning owner. And it was the identity of that winning owner that has given this minor race its place in the history books. 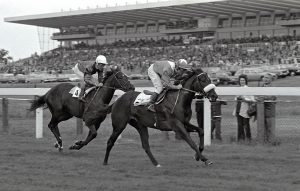 He was a tall, bearded 27-year-old, a member of the ruling family of Dubai – wherever that was.

The racecard gave his name as “Sheik [sic] Maktoum”, though nowadays we know him better as Sheikh Mohammed bin Rashid Al Maktoum. His colours were recorded as “royal blue, white chevron, blue cap, white star” – though within less than three years they had been superseded by the famous maroon, white sleeves, maroon cap with white star.

That quiet day at Brighton the blue and white were carried by the great Australian jockey Ron Hutchinson on a diminutive filly named Hatta, trained for Sheikh Mohammed by John Dunlop at Arundel.

Hatta started even-money favourite in a field of ten, and with good reason. She had made her racecourse debut in late May, finishing a highly promising sixth of 26 runners in a Sandown Park maiden, then ran second at Kempton, beaten a length.

It was only a matter of time before she won, and her backers at Brighton never had a moment’s anxiety. Perfectly at home on those eccentric contours, she cruised into the lead with more than a furlong to run and had only to be pushed out to beat Blanket by five lengths.

Sheikh Mohammed, who over the next four decades would establish himself as arguably the most influential individual in world horseracing, was off the mark.

The passion for horses which Sheikh Mohammed shared with his three brothers has been extensively documented: how from the age of 12 he took part in bareback races along the beaches of Dubai; how he spent as much time as possible with the horses at the palace stables; and how in spring 1967 he and his brother Hamdan made the short journey from Cambridge – where they were studying at a language school – to Newmarket to watch Jim Joel’s colt Royal Palace win the 2,000 Guineas, an experience which solidified in both brothers the urge not just to watch racing but to take an active part in the sport.

Through the 1970s Sheikh Mohammed’s interest in English racing steadily increased, but what concentrated his mind in particular was meeting Colonel Dick Warden.

The Dubai police department maintained a mounted division – horses could reach parts of the desert which cars could not – and had an arrangement with the Curragh Bloodstock Agency for the import of suitable mounts.

In early 1976, the batch of horses delivered to the police stables was accompanied by the Colonel, whose character is well summed up by Graeme Wilson, biographer of the Maktoum family: “Silver-haired and neatly balding, Warden was a World War II hero renowned for his exploits working with the Resistance behind enemy lines in occupied France. In peacetime, the Old Harrovian was something of an enigma. Sometime thoroughbred trainer, amateur race jockey (he rode his own horse Harewood in the 1932 Grand National), gambler and general raconteur, Warden was above all a gentleman from the old school.

“He is remembered by those who encountered him as being superb company. Sheikh Mohammed was charmed by the 68-year-old veteran and almost immediately the two struck up a friendship that would last until Warden’s death in 1990.”

Hatta was very small and crooked in one leg, but the Sheikh wanted a filly, so we bought her

That assessment of Warden is echoed by Dunlop, Sheikh Mohammed’s first trainer and a friend of the Colonel through Lavinia, Duchess of Norfolk.

He says: “He was the most entertaining man you could ever hope to meet, and a fantastic judge of a horse. The first time he went to Keeneland for Sheikh Mohammed he came back with two yearlings: one became Awaasif and the other became Jalmood.”

The admiration between aspirational owner from the Gulf and English gentleman was clearly mutual. After his first encounter with Sheikh Mohammed in Dubai, Warden reported to colleagues at the CBA: “I’ve met this charming Arab who would like to buy a few horses,” then added, in one of racing’s great understatements: “I think that one day he could be a very big owner.”

In autumn 1976 Sheikh Mohammed and Warden accompanied Dunlop to the October Yearling Sales at Newmarket, where they bought three horses: a colt by Busted, later named Shaab, for 20,000gns; a colt by Lorenzaccio, later named Haddfan, for 12,500gns; and for a mere 6,200gns a filly, who would be named Hatta after the fortified enclave in the desert outside Dubai city.

Dunlop remembers: “We were instructed to buy only colts, but quite late on Sheikh Mohammed asked that we purchase a filly for him. Pretty well all the fillies within his modest budget had already been sold, and very little was left for us except this Irish-bred Realm filly, who did not exactly inspire us with confidence. She was very small indeed and crooked in one leg, but the Sheikh wanted a filly, so we bought her.”

Hatta was registered in Sheikh Mohammed’s name, as was Haddfan, while Shaab was recorded in the ownership of the oldest brother of the four brothers, Sheikh Maktoum Al Maktoum. At Warden’s recommendation the three youngsters went into training with Dunlop.
“When meeting Sheikh Mohammed for the first time I was immediately struck by his charm,” the trainer recalls. “While he clearly knew a great deal about horses, he was very keen to learn all he could about English racing.

“He bombarded me with questions about the preparation of thoroughbreds, and while he understood horses as a species, he was trying to reconcile his own understanding of the subject with the principles of training finely-tuned equine athletes.”

Hatta could hardly have found a more congenial home than Dunlop’s Arundel yard, and in the wake of her Brighton victory she went from strength to strength.

In early July 1977 she trotted up in the Myrobella Stakes at Salisbury – ‘tracked leader; led below distance; easily,’ said the form book – and then scored almost as easily in the Raynes Park Stakes at Sandown Park, starting at evens and again winning with the minimum of fuss.

It was time to move into Pattern company, and Dunlop saw an opportunity for Hatta in the Group 3 Molecomb Stakes at Goodwood, a race which in those days was confined to juvenile fillies.

The trouble was that the Molecomb looked like a shoo-in for Amaranda, owned by RB Moller and trained by Harry Wragg, a brilliantly fast filly unbeaten in two races, notably the Queen Mary Stakes at Royal Ascot. With Lester Piggott in the saddle for the Molecomb, as he had been for Amaranda’s two earlier races, she started at 2-7, with Hatta on 7-1. It was 20-1 bar those two in a field of seven. 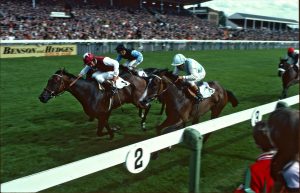 If Hatta’s chance appeared tenuous on paper, it appeared a completely lost cause in the early stages of the race, when she was seriously outpaced by the favourite. Halfway through the five-furlong trip Amaranda was still cruising, with Hatta vainly trying to get on terms, but inside the final furlong Hutchinson conjured a fresh effort from his filly. Amaranda failed to quicken – and at the winning post Sheikh Mohammed had landed his first Group race by a margin of two and a half lengths.

After a disappointing run when tried over six furlongs in the Firth of Clyde Stakes at Ayr, Hatta retired for the season. Hopes were high for a successful three-year-old term, but in the event she met a series of setbacks and was retired to the paddocks without having raced at three.

Thanks to Hatta’s four wins, Sheikh Mohammed finished the 1977 season with win prize-money of £10,857 – a drop in the ocean compared with what was to come, but an encouraging start none the less.

And he matched that total of four winners in 1978, with Dunlop-trained Haddfan winning at Pontefract and two horses with Fulke Johnson Houghton also successful: Swanlinbar at Folkestone and Le Silentiaire at Ayr and Yarmouth – the Yarmouth race especially noteworthy as Piggott’s first win for Sheikh Mohammed.

Forty years on, we can look back at a little-known horse winning for an unknown owner on that nondescript Monday at Brighton as the moment when the tectonic plates of world racing started to shift.

Or to wheel out the obvious cliché: the rest is history. 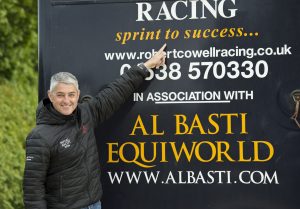 Up Next
Cowell's got talent