A first Epsom-trained Classic winner since 1969

By The Owner Breeder staff 11 September 2016

In a race which has alluded Ballydoyle on more occasions than expected, they looked to hold all the aces this time around as hot favourite and Irish Derby runner-up Idaho lined up alongside two of his stable companion’s in a bid to give Aidan O’Brien a fifth win in the oldest Classic.

Events were to take a dramatic twist inside the final four furlongs with Idaho taking a false step and stumbling badly, unseating rider Seamie Heffernan.

The door was left open for a fairy-tale triumph in the shape of Laura Mongan’s Harbour Law, who was to become the first Epsom-trained Classic winner since 1969.

The nine-strong field were taken along at a brisk pace by the John Gosden-trained Muntahaa who was last seen in action in the Listed Chester Stakes over a mile and five furlongs.

Favourite Idaho was held up just worst of mid-division under Heffernan while the likes of Harbour Law and the Mick Channon-trained Harrison watched on from the rear.

As the field turned and packed up coming into the final half-mile, drama was to unfold just as Idaho who was beginning to make progress stumbled and unshipped Heffernan to the gasp of the Doncaster crowd.

As the remaining eight entered the final three furlongs, Muntahaa relinquished the lead to Ballydoyle’s Housesofparliament who himself was immediately tackled by Ventura Storm on his inner. The duo locked battle inside the final furlong, while just in behind Harbour Law made significant headway under George Baker and kicked in overdrive, collaring them both by just under a length.

In extraordinary scenes on Town Moor, Baker tastes Classic success for the first time in his career. The six-foot tall rider met with disappointment only 24 hours earlier as smart stayer Quest For More was narrowly denied late on in the Doncaster Cup. But this rapid reversal in fortunes comes on the back of a fine season.

“I can’t believe it I’m so happy for Ian and Laura because they’ve had so much belief in him,” reflected Baker.

“It was a hard day yesterday and I find you’ve got to get over it, work out if you can make any improvement and today was just a sweet result.”

For Mongan who trains at the home of The Derby with husband and former jockey Ian, Harbour Law was not only the stables first runner in a Classic but also their first runner in a Group 1. She is perhaps best remembered for her success over jumps with First Avenue in the Imperial Cup at Sandown three years ago.

Mongan said: “It’s a bit surreal at the moment. I did a lot of screaming but it was brilliant and a really professional performance by the horse.

“It just proves that Epsom can do it we’ve got the facilities and we can produce horses with the right ammunition.”

Earlier in the afternoon, the William Haggas-trained Rivet justified favouritism in the Group 2 At The Races Champagne Stakes over seven furlongs, which has been won in recent years by the likes of Godolphin’s Outstrip and Emotionless.

Last seen winning a strong maiden at York, the son of Fastnet Rock was produced in the final two furlongs by Andrea Atzeni to challenge runner-up Thunder Snow on the rail. Rivet displayed a good attitude inside the final furlong and got up by a head at the post.

Atzeni was on the score-sheet again after partnering Breton Rock to victory in the Group 2 Saint Gobain Weber Park Stakes over seven furlongs.

Last into the gate, the David Simcock-trained six-year-old came from last to first to narrowly deny Ballydoyle’s four-year-old colt The Happy Prince by a short-head. 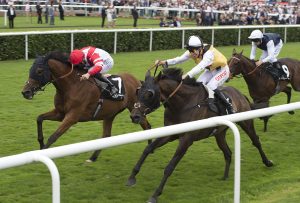 Up Next
Cup honours for Sheikhzayedroad