Already a five-time Grade 1 winner over fences at the age of eight, Milord Thomas stamps himself as one of the best chasers in the world despite having only raced in his native France.

In an era which includes the likes of impressive King George winner Thistlecrack and the Willie Mullins-trained Douvan, the son of Kapgarde even has a few up on those superstars.

He is trained by former jump jockey Dominique Bressou, who is based within sight of Mont-Saint-Michel on the west Normandy coast. Bressou has handled Milord Thomas throughout his 33-race career so far and has accrued healthy returns.

Those returns, £1.5 million, are three times as much as Douvan and almost £1 million more than the Colin Tizzard-trained nine-year-old.

Milord Thomas splits the pair in age and is much the most precocious of the trio having begun racing in September of his three-year-old season and made his first visit to the Mecca of French jump racing, Auteuil, just a month later.

While Thistlecrack’s last ten starts have all near enough been over three miles, and Douvan has never been asked to go beyond two miles Milord Thomas won over two miles in Autumn 2015, and shortly after won France’s top steeplechase over three miles and six furlongs.

His career win percentage, however, is a modest 36 compared to 72 for Thistlecrack and a remarkable 93 for Douvan. But, in terms of successes in showpiece steeplechases and prize-money gleaned in such races, the French horse is streets ahead.

The apple of Jacques Ricou’s eye, who has partnered him on his last 20 starts, he has already won the Prix La Haye Jousselin – the French equivalent of our King George – on three occasions, the last of those coming on his most recent start in November.

Not only this, he plundered the 2015 renewal of the Grand Steeple-Chase de Paris, the closest cross-Channel race to our Cheltenham Gold Cup.

Milord Thomas should be celebrated for his own sake

Sadly, we are unlikely to see the three clash in the same race as Bressou is reluctant to bring his star jumper across to Britain.

Yet Milord Thomas should be celebrated for his own sake. When Al Capone II landed a seventh straight Haye Jousselin back in 1999, it was widely accepted that his feat would never be bettered.

Should Milord Thomas remain sound and race within a few weeks of turning 12, he could just have a realistic chance of emulating him. 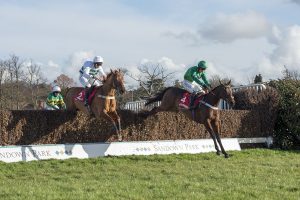 Up Next
Top Notch delivers in spades