The Last Lion sprang a surprise in the Middle Park Stakes

With his long association as stable jockey to Mark Johnston, 46-year-old Joe Fanning has accrued a whole host of Group 2 and Group 3 victories throughout his distinguished career. Surprisingly, a success at Group 1 level had up until now alluded the County Wicklow-born rider.

This was all to change following the conclusion of the Group 1 Juddmonte Middle Park, as his mount The Last Lion led pillar to post in a warm renewal of the six furlong contest for two-year-olds.

From the starting gate, The Last Lion was taken straight to the front by Fanning leading his nine rivals at what looked an honest pace.

Gimcrack-winner Blue Point tracked the leader in a handy fourth for Godolphin while Mehmas in the colours of last year’s winning owners and the Ballydoyle pair Peace Envoy and Intelligence Cross, were held up towards the rear.

The leader began to turn the screw with just over two furlongs to go. Blue Point got within a neck of the leader a furlong down while the others in behind failed to make an impression on the front two. The Last Lion battled on bravely to fend off the challenge securing victory by just under a length.

The son of Choisir had given Fanning a string of close calls at Royal Ascot and a Doncaster’s St Leger meeting, only going down by less than a length on both occasions. For Fanning, who is approaching the twilight of his career a long awaited first success at Group 1 level could not be more deserving.

“I’ve ridden a lot of Group 2s and Group 3s but never a Group 1 so it’s nice to finally nail that one,” reflected Fanning.

“He is very laid back and I was going so well. When I rode him at Kempton over six [furlongs] I thought he would stay seven and we always thought he was better on soft ground!”

For the Yorkshire-based juggernaut that is the Johnston team, success in the Middle Park Stakes isn’t something they’re unfamiliar with.

The speedy Awzaan gave them their first triumph in the race back in 2009 when ridden by Richard Hills for Sheikh Hamdam Al Makhtoum.

Johnston said: “It’s a fairy-tale right from the beginning.

“It shows that you shouldn’t pigeon-hole horses after one or two runs. Here he is on fast ground running the race of a lifetime on his tenth start of the year.”

Earlier in the afternoon, the Hugo Palmer-trained Best Of Days took the honours in the Group 2 Juddmonte Royal Lodge Stakes over one mile.

The son of Azamour last seen losing narrowly in the Group 3 Acomb Stakes, was held up in the last trio by James Doyle. He was brought through with a strong run to lead just over a furlong out and held off the late challenge of The Anvil.

The American contingent were in full force on the Rowley Mile to see their star attraction Lady Aurelia in the Group 1 Connolly’s Red Mills Cheveley Park Stakes.

Frankie Dettori took the favourite to the front from the outset racing keenly. Inside the four furlong pole the duo were a good four to five lengths clear of their rivals injecting a degree of pace. The pack began to close with two furlongs to go led by the Aidan O’Brien-trained pair Roly Poly and Brave Anna.

The latter pair gradually got on terms with Wesley Ward’s filly and shot past in the last 50 yards with Brave Anna called the winner by a short-head in the photo finish for owner-breeder Mrs Stockwell. 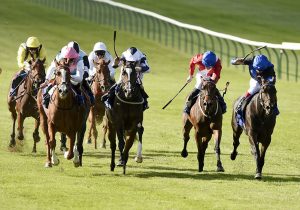 Up Next
Deserving Mountain prevails on Rowley