By The Owner Breeder staff 16 September 2021

The Osarus La Teste Yearling Sale concluded on Wednesday with TJ Bloodstock and Middleham Park Racing going to €50,000 for a colt by Gutaifan, one of the joint-top lots at the 2021 edition of the auction.

Offered by Haras des Faunes, the colt is out of the winning and Group 2-placed Byron mare Senafe and is from the family of Kirsten Rausing’s Group 1 heroine Madame Chiang.

Middleham Park did not travel to France but instead utilised the services of Peter and Toby Jones, who are based in the country, to purchase the youngster.

Speaking to Racing Post Bloodstock, Middleham’s Tom Palin said: “We’ve had some luck there as we bought Boitron, who was fourth in the Prix Jean-Luc Lagardere a few years ago, as well as Tigre Du Terre, who was Listed-placed and won a valuable race at Sandown before being sold to Hong Kong.

“Obviously we couldn’t see him physically, but Peter and Toby were very impressed with him and we agreed with everything they said; he looked a very nice model.

“Tom Dascombe has had a terrific season and has won five times with Kayfast Warrior this year, hopefully there should be more to come from him too, so it would be rude not to thank him by sending him another horse.”

The Gutaifan colt matched the price that Mandore Agency paid on behalf of Jean-Claude Rouget for the Almanzor colt that headed Tuesday’s session.

The organisation were active again on Wednesday as they went to €48,000 to secure a colt by Toronado offered by Haras du Buff who is from the family of Peace Envoy and Windsor Forest. 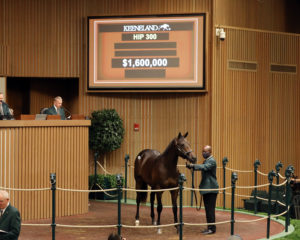 Up Next
Quality Road colt on top at September Yearling Sale