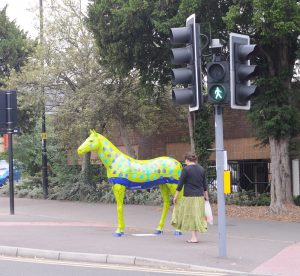 Visitors to Newmarket for the racing and sales this week are likely to come face-to-face with lifesize model horses dotted around the town as part of what is described as a “community art event”.

The project ‘Horse About Newmarket’ consists of 13 full-size colourful models, each of which has been painted to represent a 2,000 Guineas winner from history, with Cockney Rebel, Garden Path, Only For Life, Atlantic, Nectar, Ten Winners In Blue, Shadeed, Wizard, Mystiko, Sunstar and Interpreter all selected by the artists. Local schools have also been responsible for decorating a further 16 smaller horses.

One of the most recent 2,000 Guineas winners, Sea The Stars, proved to be so popular that he has two horses painted in his honour, one standing proudly outside the Jockey Club Rooms in the High Street and the other near the new Premier Inn on Fred Archer Way.

Perhaps the most innovative is the 2007 winner Cockney Rebel, standing outside the café at the clock tower and sporting a pearly kings-style headcollar. His real-life namesake can be found at the other end of town, standing at the National Stud.

Newmarket Town Council has organised a walking tour which takes in each of the models en route. Maps for the Horse About Newmarket tour can be found in the National Horseracing Museum on Newmarket High Street. 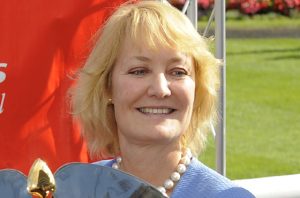 Up Next
Driven to succeed