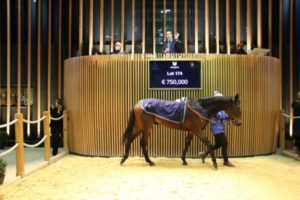 Durance led the opening session of the Arqana December Sale on a bid of €750,000. Photo – Arqana

Covid-19 and its ramifications may have restricted the depth of the sale’s international audience but as at Tattersalls earlier in the week, the ability to trade online emerged as a valuable tool, as illustrated by the sale of Group 3 winner Spinning Memories to an online bid of €500,000 from Shadai Farm.

“I think it has been a very solid market,” said Delahooke. “Animals have sold very well – the internet has obviously become a big tool and the market has held up very well.”

Delahooke was speaking after signing for the session-topper Durance on behalf of Pursuit Of Success LLC.

“I thought she was the pick of the sale because the family has done so well with stallions that I’m ashamed to say I’ve never heard of,” said Delahooke. “The first dam fills the whole page – that’s very rare these days. She herself had an admirable race record, she’s a lovely individual and apparently a lovely person.

“I’ve bought her for a very nice American gentleman who has some mares in Kentucky and others in England. We haven’t discussed yet where her future lies.”

Gestut Ebbesloh bred the filly out of Djidda, whose overall stud record consists of eight stakes horses including the Group 3 scorer Dabbitse and Listed-placed Devilish Lips, the dam of Group 2 winner Dragon Lips.

Durance was the highlight of an evening during which 12 lots sold for for €400,000 or more. The list, however, did not feature the Group 1 Preis von Europa heroine Donjah, who failed to sell at €720,000.

The opportunity to buy into one of the most successful European families of the current era helped fuel strong interest in the young mares Truth and her close relation Psara.

The pair are granddaughters of the Zafonic mare Platonic, an early purchase by Ecurie des Monceaux and Skymarc Farm who has gone on to exert a tremendous influence, both on the track and in the sale ring.

Truth, a former €1 million Arqana yearling offered this time around by Haras de Bouquetot in foal to Siyouni, commanded €580,000 from James Delahooke on behalf of Willie Carson’s Minster Stud. 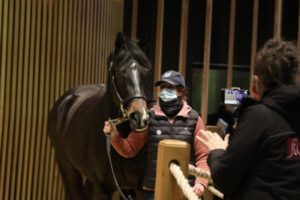 The daughter of Galileo is out of Listed winner Prudenzia and therefore a sister to the remarkable Magic Wand and half-sister to Irish Oaks heroine Chicquita.

Delahooke was understandably delighted to land the mare on behalf of his client.

“Two years ago I was underbidder here when Magic Wand was sold in this ring,” said Delahooke. “The Coolmore boys bought her and I followed her career with great excitement – and sadness as we hadn’t been able to buy her on that occasion. Now we have bought her sister for Willie Carson, who has a very successful stud in Gloucestershire.”

Ghislain Bozo of Meridian International, meanwhile went to €500,000 for Psara, an Invincible Spirit half-sister to this year’s Prix de Lutece winner Paix who is out of Platonic’s Group 3-winning daughter Pacifique.

A winner herself who was classy enough to run fourth in the Listed Prix de l’Avre, the four-year-old was sold in foal to Churchill.

“I loved everything about her!” said Bozo. “She is a magnificent mare, with a lot of quality and very well-bred. She has it all!

“She’s in foal to Churchill, he’s a stallion that I like a lot and I think he’s an ideal cross. I bought her as part of a partnership.”

A notably productive day for Wertheimer et Frere as vendors was capped by the sale of their Listed-winning homebred Euclidia for €525,000 to agent Gerard Larrieu.

A two-time winner for Christophe Ferland who struck in this year’s Listed Prix Panacee at Toulouse, the daughter of Maxios boasts the additional allure of being a half-sister to Group 3 winner Soustraction and Listed scorer Matematica. They were produced by Mathematicienne, a Galileo granddaughter of the Wertheimer’s outstanding producer Brooklyn’s Dance, the dam of Arc heroine Solemia and granddam of top miler The Gurkha.

“I bought Euclidea for Jean-Louis Bouchard who has a small stud near Deauville,” said Larrieu. “He wanted to enrich his broodmare band with quality mares like this one. I hope this Wertheimer family will be of great benefit to him. Her dam and sister were sent to top stallions like Dubawi and if we keep this momentum going we should be fine!”

Wertheimer et Frère ended the day as leading vendor thanks to the sale of 19 lots worth a total of €3.018 million. 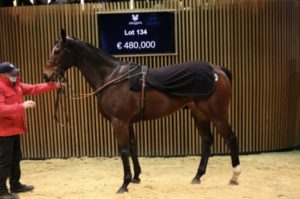 In keeping with earlier breeding stock auctions such as the Keeneland November and Tattersalls December Sales, online activity played a key role in proceedings, particularly in relation to Japanese participation.

Teruya Yoshida’s Shadai Farm utilised the platform to great good effect to come away with pair of high-class fillies in Spinning Memories at €500,000 and Mageva at €430,000.

For dual Group 3 winner Spinning Memories, it was a second turn through a sale this year following her appearance in an online auction hosted by Australian sales company Magic Millions back in June. Then fresh off a win in the Group 3 Prix du Palais-Royal at Clairefontaine for Pascal Bary, Spinning Memories failed to sell at A$1.135 million that day and remained in the ownership of Pan Sutong, for whom she later ran down the field in the Group 1 Prix Maurice de Gheest and Prix de la Foret.

Returned to the marketplace on Saturday, Japanese interest ran strong in the daughter of Arcano, with Shadai representatives forced to go to €500,000 to fight off Satoshi Kobayashi.

Kobayashi had better luck in his pursuit of this year’s Group 3 winner Prix Fille de l’Air winner Directa, a daughter of Anodin sold by Joel Boisnard for whom he paid €475,000 on behalf of Haruya Yoshida’s Oiwake Farm.

Shadai also came out on top at €430,000 for this season’s Poule d’Essai des Pouliches third Mageva, by Wootton Bassett.

Both Spinning Memories and Mageva were sold as fillies in training but given their change of ownership, it would be no surprise to see them head straight to Hokkaido to commence their breeding career. 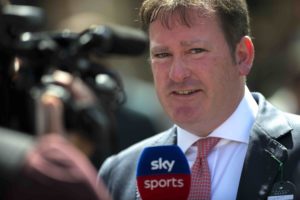 Up Next
Ed Vaughan begins new chapter training in the USA