Greece slick on the ice

The mountain air clearly agrees with George Baker’s six-year-old Ancient Greece, who made history on February 17 when becoming the first horse to win in three consecutive weeks on the frozen lake at St Moritz.

The Darley-bred son of Pivotal started his winning streak by landing the Grand Prix American Airlines over a mile in the hands of amateur rider Freddie Mitchell. A week later he was back for more success in the snappily-titled Preis Top Events of Switzerland und Galopprennfreunde Schweiz, this time over ten furlongs and with Josef Bojko aboard.

For his third victory in 15 days, Ancient Greece was tried over the nine furlongs of the Grand Prix The St Leger Club of Lucerne, with Jim Crowley thrusting him home up the run-in to land the spoils on the line from Italian raider Mont Pelato.

A four-time winner over regular turf in the UK, Ancient Greece was bought by Baker, who has recently relocated his string from Whitsbury Manor to Manton, at the age of three for just £3,800 from a Darley dispersal at the DBS Horses-in-Training sale in April 2010.

His hat-trick-sealing rider Jim Crowley also tasted success on the ‘White Turf’ at St Moritz last year when guiding the Ralph Beckett-trained Maverik to victory in the Grosser Preis Gunter Sachs Memorial Race. Appropriately, the now five-year-old gelding is a son of Iceman. 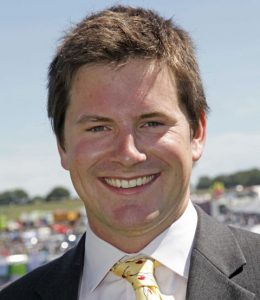 Up Next
New Chairman for TBA NGC