The awards, now in their ninth year, were held at the Jumeirah Carlton Hotel in London with host Clare Balding joined by special guest presenter, the champion jockey Richard Hughes.
Bennett’s prize as the overall winner was £30,000, of which £15,000 will be shared amongst the staff at Kingsley House Stables at Middleham. He was also the winner of the Dedication to Racing category, for which he receives £5,000.

Bennett has worked for more than 40 years and during that time has been employed by just two trainers. While employed by Bill Watts he travelled Teleprompter to the Arlington Million in 1985. Upon Watts’ retirement in 1997, Bennett joined Mark Johnston Racing, initially as a yardman before being made Assistant Trainer.

The winners in each of the six categories, which included a new award for administration staff, were decided upon at a judging day on Sunday at the British Horseracing Authority’s London headquarters, where each of the finalists was interviewed by members of the judging panel.

Brough Scott, Chairman of the Panel said: “Jock Bennett should be an inspiration, not just for racing but for life itself. He links old-fashioned values with ground-breaking ways without ever losing the thrill that lifted him from the beginning. This was a truly wonderful set of winners. Racing is very lucky to have them.”

The full list of winners and runners-up for 2013 are as follows: 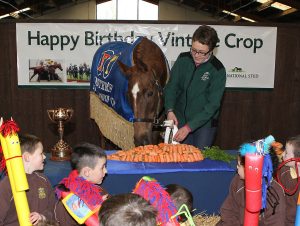 Up Next
A Vintage year