The rain may have been relentless but that didn’t stop the quality shining through at Bangor racecourse, where 46 mares and foals lined up for the third TBA National Hunt Foal Show.

Leading the way as overall champion was Goldford Stud and Steven Hadley’s colt by Great Pretender out of the multiple hurdles and chase winner Bold Fire.

“We brought three colts to the show and we couldn’t choose between them. I left it entirely up to Sally to make the decision and all the work has been done by Sally and her staff. I’m only here in reflected glory!”

The Astons have enjoyed great success with Great Pretender’s late sire King’s Theatre as breeders of his Grade 1 winner Riverside Theatre, while the Roland Crellin-bred Cue Card was also raised at Goldford Stud.

Aston continued: “King’s Theatre was so good to use – it’s hard to think of a single horse that we bred by him who wasn’t a winner – so when Great Pretender came over from France to Yorton Farm Stud I went to see him and loved him. My only regret is that he stayed in England for just one season because I thought the foals here by him are a good bunch who are athletic and look like racehorses.”

Golford’s April-born foal, one of the youngest members of the older’ colts division, won his class en route to championship honours and on each occasion his runner-up was a Milan colt out of the smart Grade 2-winning chaser My Petra. He was shown by Robert Chugg’s Little Lodge Stud on behalf of his breeders, Richard and Lizzie Kelvin Hughes.

Richard Kelvin Hughes, who is sponsoring the new Grade 2 Trull House Stud Mares’ Novices’ Hurdle at the Cheltenham Festival, said of his reserve champion: “We’re very pleased. It means so much when you’ve actually raced the mare as well and we’re fortunate enough to be breeding to race. It’s a dream and events like this help it along the way.

“I wish there were more shows like this. I think it would be interesting to see the yearlings here too in the future.”

DBS sponsored the show for the first time and, as well as providing cash prizes for the winner and runner-up in each of the four categories, is offering free entry to its January Sale for the eight finalists. The EBF also lent its support to the event in providing lunch for the competitors and judges.

The older fillies’ class was won by The Glanvilles Stud’s daughter of Kapgarde out of the Barathea Guest mare Doubly Guest, while the younger colts’ division was headed by a Kayf Tara son of Miss Invincible, by Invincible Spirit. He was shown by Warren Chase Stud, which is owned by the colt’s breeder Aiden Murphy.

The breeder of last year’s supreme champion, Pauline Cowey, was in the ribbons once again when her filly by Sulamani out of She Likes To Boogy, shown by Yorton Farm Stud, was judged to be the winner of the younger fillies’ class.

Once again the judges hailed from England, Ireland, Scotland and France, with the panel of six being filled by Tessa Greatrex, Anna Ross, John Bleahan, Hubert Barbe, Robert Robinson and Cathal Murphy.

Richard Aston is also one of the main organisers of the show along with David Futter of Yorton Farm Stud and, while delighted with a rise in numbers and quality among the entries, says there’s still room for improvement.

He commented: “The show has grown quickly in three years which is great to see. Every year to date we’ve concluded the day’s proceeding with lessons learned and there are still things we can do to improve the event. I won’t rest until I see 2000 people here to watch the show.” 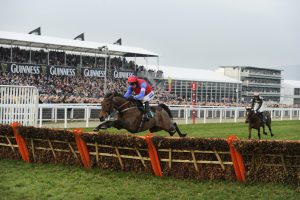 Up Next
New mares' hurdle for Cheltenham