This year’s Supreme Novices’ hurdle winner Altior lined up in the Weatherbys Supports Starlight Novices’ Chase against just one rival.

That opponent was to be the Paul Nicholls-trained Black Corton, rated 21 lbs inferior over the smaller obstacles.

Altior was allowed to stride on after the second flight under Noel Fehily, who was stepping in for the sidelined Nico de Boinville.

The duo raced on by a good eight lengths with under a circuit to go. The six-year-old measured the next row of fences down the back straight with little problem.

At the last of the ditches, five from home, he made the only semblance of an error during the round. Getting in close he scattered the birch.

He jumped the last four fences proficiently, a significant margin ahead of Black Corton, a remote 63 lengths in his wake.

“He was very good, very forward going and he used his brain. He got in tight to plenty of them but got himself out of trouble, which he needed to learn,” reflected Fehily.

“We probably weren’t going quick enough when he made the error, but he was good getting out of trouble. He’s got loads of scope and we know he’s very good.”

A son of Derby winner High Chaparral, Altior is arguably one of the most exciting novice chasers in training.

As short as 2/1 for next year’s Arkle Challenge Trophy, his winning sequence has extended to six, with his two Graded successes coming at Prestbury Park.

Henderson said: “He races with his head low, which is lovely and a great way to go over fences. We were debating whether to make him a Champion Hurdle horse. We could if we wanted to, but he’s been so good at this.

“He’s built like a chaser and I thought he jumped great, especially five out when he got in a bit close but was clever. 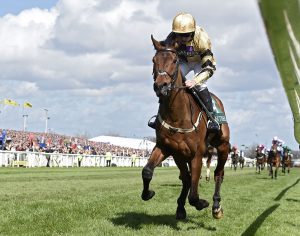 Up Next
Canyon dominates Morgiana field