For the first time since World War II, Aintree’s famous Grand National course will see no runners jump the iconic fences as the 2020 race has been cancelled due to the coronavirus pandemic.

Tiger Roll’s bid to try and emulate the great Red Rum and capture his third National will have to wait until 2021.

Owner Breeder photographer George Selwyn first covered the race on Merseyside in 1974 and he has delved into his archive to select seven of his favourite Grand National pictures from the past 45 years. 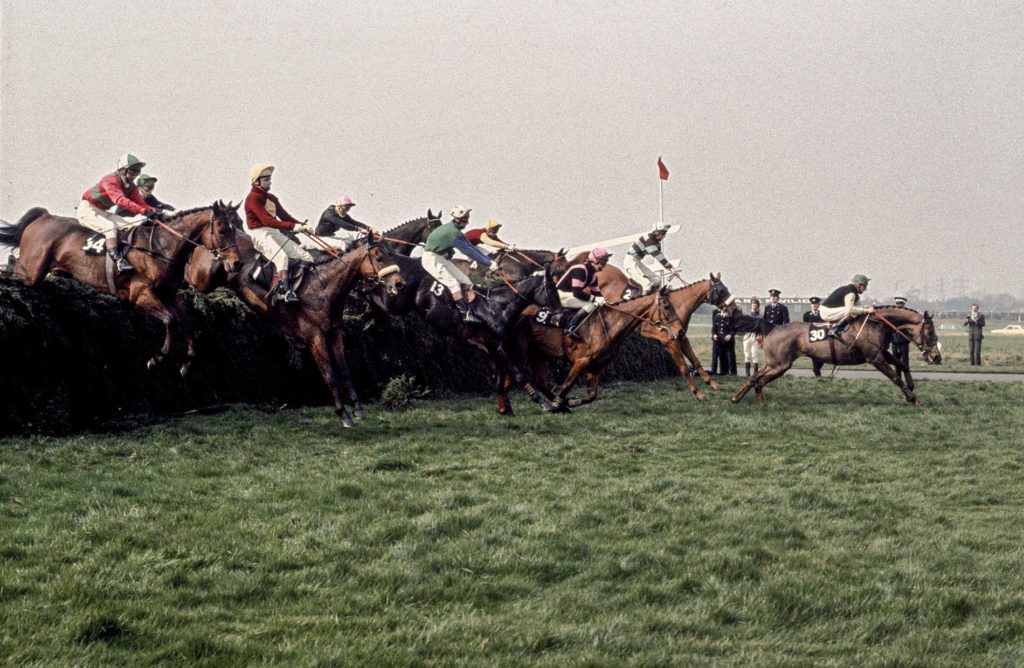 Red Rum (no 1) jumps the 16th fence with the leaders on the way to winning a second Grand National in 1974 – Photo: George Selwyn

Selwyn’s first year of covering the Grand National tied in with Red Rum’s bid to become the first horse since Reynoldstown in 1935 and 1936 to win back-to-back editions of the famous race.

His 1973 success came at the expense of joint top-weight Crisp under Richard Pitman, who looked certainties jumping the final fence – they were 15 lengths clear according to Peter O’Sullevan’s commentary – but tired badly approaching the elbow and were overhauled in the shadows of the post.

Red Rum’s task in 1974 was to defy the top weight of 12 stone he had been allotted by the handicapper.

In what proved to be a dominant display, the extra weight was no burden for Red Rum, and he beat L’Escargot by an impressive seven lengths to secure his place in the record books for trainer Ginger McCain, jockey Brian Fletcher and owner Noel Le Mare. 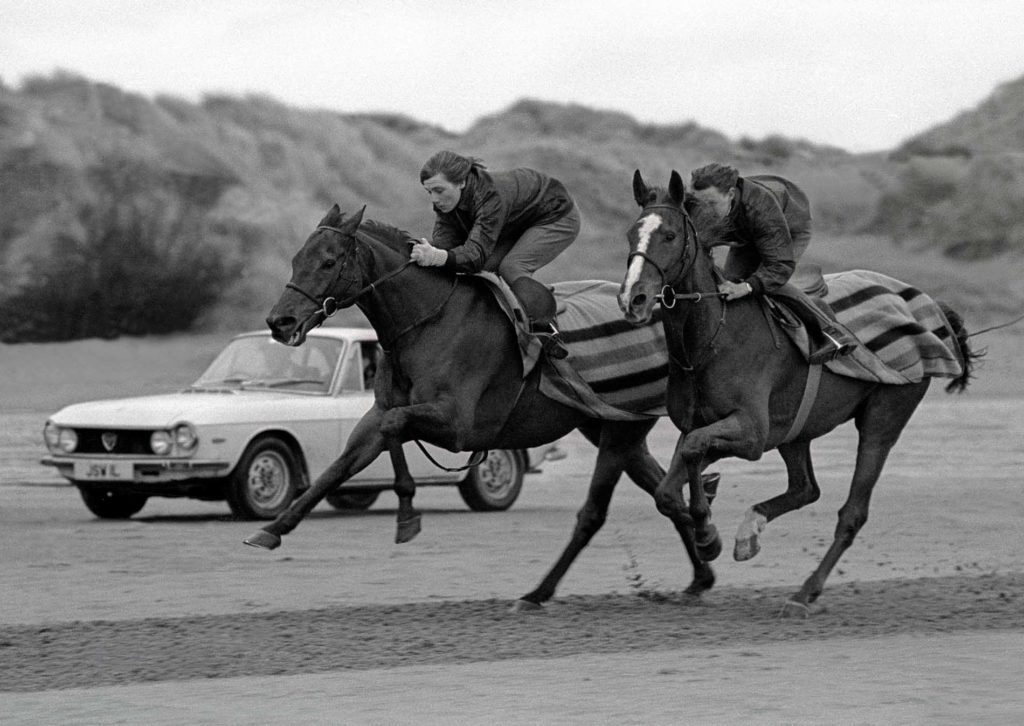 All eyes were on Red Rum in 1975 as he searched for an unprecedented third National triumph. There was so much interest in the story that he even graced the front cover of that week’s Radio Times.

Two days before the Grand National, Selwyn ventured over to Southport, where he snapped Red Rum exercising on the beach.

There wasn’t to be a third straight success for Red Rum and McCain in 1975, as the soft ground went against them. Giving away 11lb to old foe L’Escargot, winner of the Cheltenham Gold Cup in 1970 and 1971, Red Rum finished second behind his Tommy Carberry-ridden rival, beaten 15 lengths.

Red Rum finished second again in 1976 behind Rag Trade and landed the hat-trick in 1977 aged 12 under Tommy Stack. 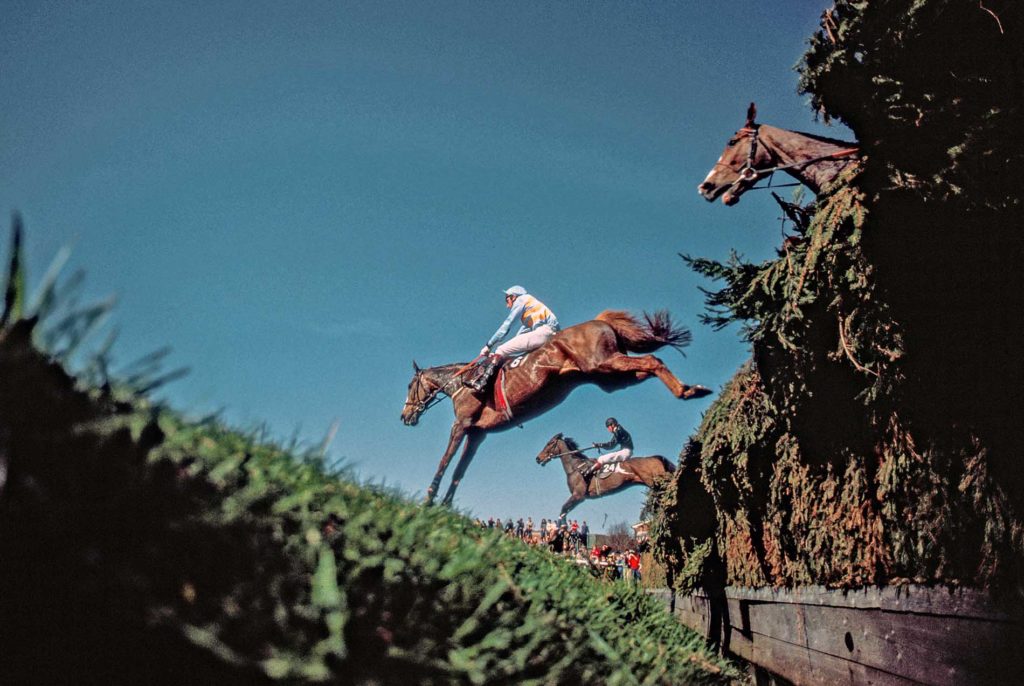 Up until 1983, no woman had ever trained the winner of the Grand National. That was until Jenny Pitman came along with Corbiere and sealed a memorable success at Aintree.

Named after the Jersey lighthouse by his owners the Burrough family, Corbiere warmed up for his tilt at the Grand National with a second-placed effort at the Cheltenham Festival in the National Hunt Handicap Chase.

Partnered by Ben de Haan, it was Corbiere and Hallo Dandy, who would go on to win the race in 1984, that vied for the lead. At Valentine’s, Corbiere saw off his challenge and kept the fast-finishing Greasepaint at bay to triumph by three-quarters of a length. 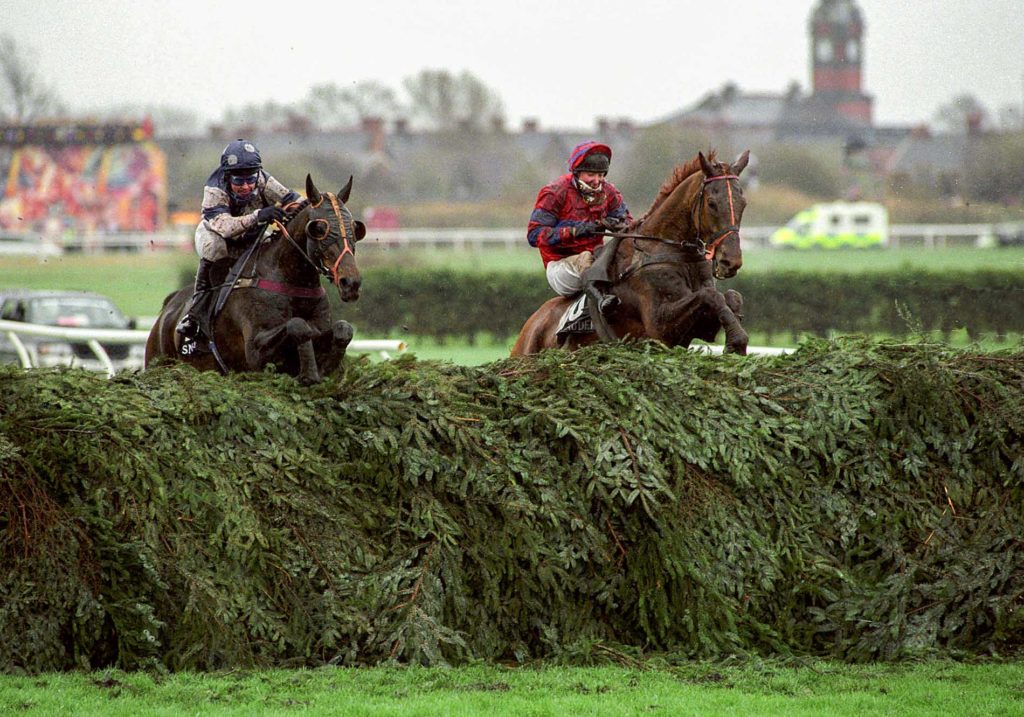 Persistent rain had left the ground at Aintree barely raceable in 2001 but the Grand National still went ahead. Many of the 40 runners departed early on, with the fallers then running loose across the course.

By the time the field reached the Canal Turn, the riderless Paddy’s Return interfered with eight runners by veering straight across them in scenes reminiscent of 1967, when Foinavon avoided the pile-up at the 23rd fence.

Only seven runners headed out for the second circuit, among them Red Marauder and Richard Guest, who had moved up to be fourth by this stage. After Blowing Wind and Papillon refused, it was Beau, Smarty and Red Marauder who had the race between them.

Beau’s departure at the 20th fence left it to Smarty and Red Marauder to fight it out. A hesitant jump at the fourth-last from Red Marauder looked to have given Smarty the advantage but the former made the ground up as they crossed the Melling Road for the final time.

Red Marauder, owned and trained by Norman Mason, forged on with the lead, pulling clear of Smarty, and despite walking through the second-last, he cleared the last and came home alone. Only four horses finished the race for the first time since Ben Nevis won in 1980, with Blowing Wind and Papillon being remounted to fill the minor places. 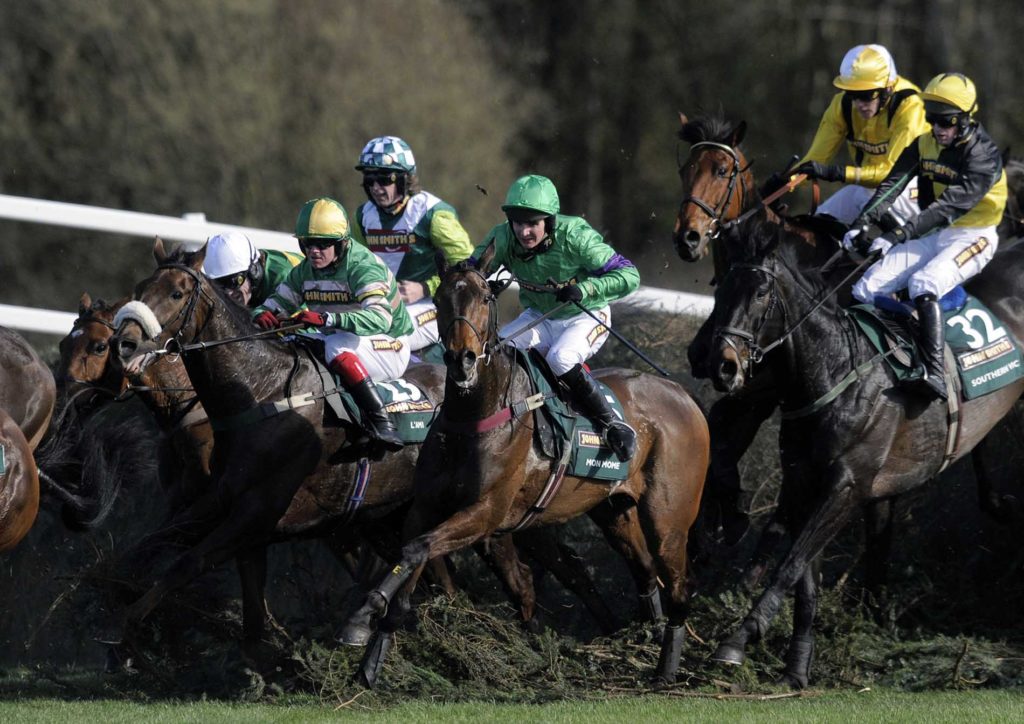 Having finished tenth behind Comply Or Die in the 2008 running with Aidan Coleman in the saddle, the Venetia Williams-trained Mon Mome returned a year later for a second crack at the Grand National, this time partnered by Liam Treadwell.

Black Apalachi had produced a magnificent round of jumping in the lead for jockey Denis O’Regan until they reached Becher’s Brook for the second time and parted company.

Several horses were in contention at that point but it was as the field headed towards the Canal Turn that Mon Mome began to make headway. Fifteen horses were clustered together as they turned for home and it was at the last fence that 2008 hero Comply Or Die jumped to the lead.

Yet Mon Mome was right on his tail and as they hit the elbow, the Passing Sale gelding found another gear to draw away and score by 12 lengths. It was Liam Treadwell’s first ride in the contest while Williams became only the second woman to train a National winner. 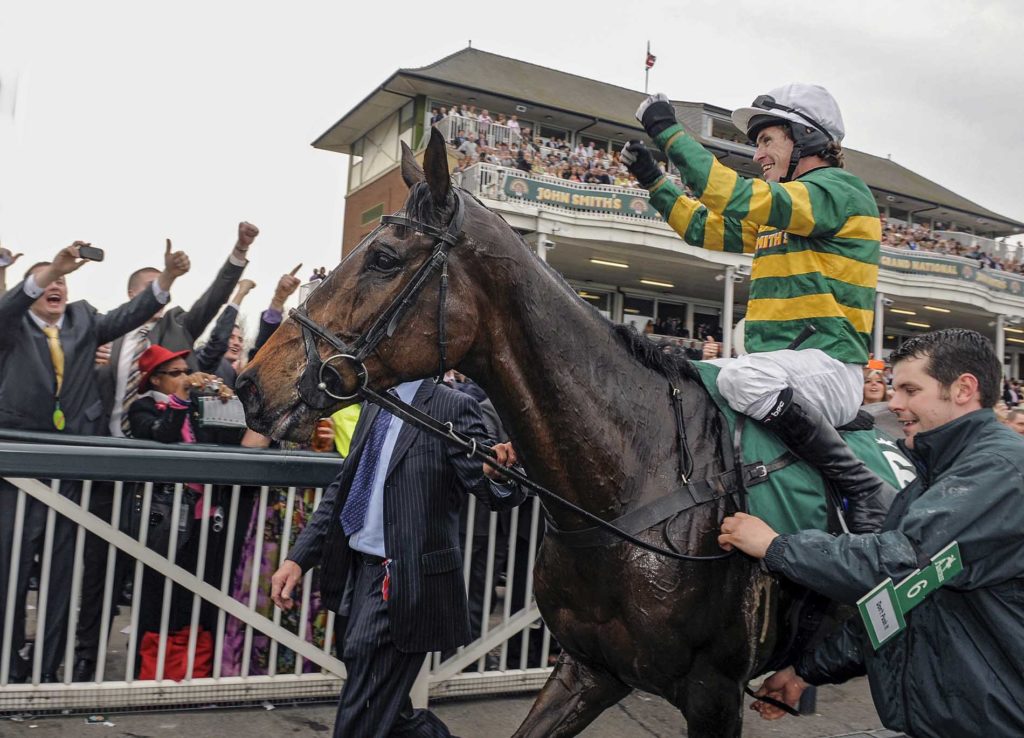 AP McCoy celebrates on Don’t Push It after landing the Grand National at his 15th attempt – Photo: George Selwyn

The sport’s greatest jockey, AP McCoy, won pretty much everything during his career but the one glaring omission on his CV was the Grand National.

Ten years ago, that all changed when on his 15th attempt, McCoy crossed the winning line first aboard the Jonjo O’Neill-trained Don’t Push It, in the famous green and gold silks of owner JP McManus.

Having been settled in midfield by McCoy during the first circuit, Don’t Push It crept into the contest as the field approached the Canal Turn second time. McCoy waited patiently before producing Don’t Push It at the second-last to make his challenge.

The pair jumped the final fence in the lead and despite the resolute challenge of Black Apalachi, there was no stopping McCoy from finally getting his hands on the famous trophy. 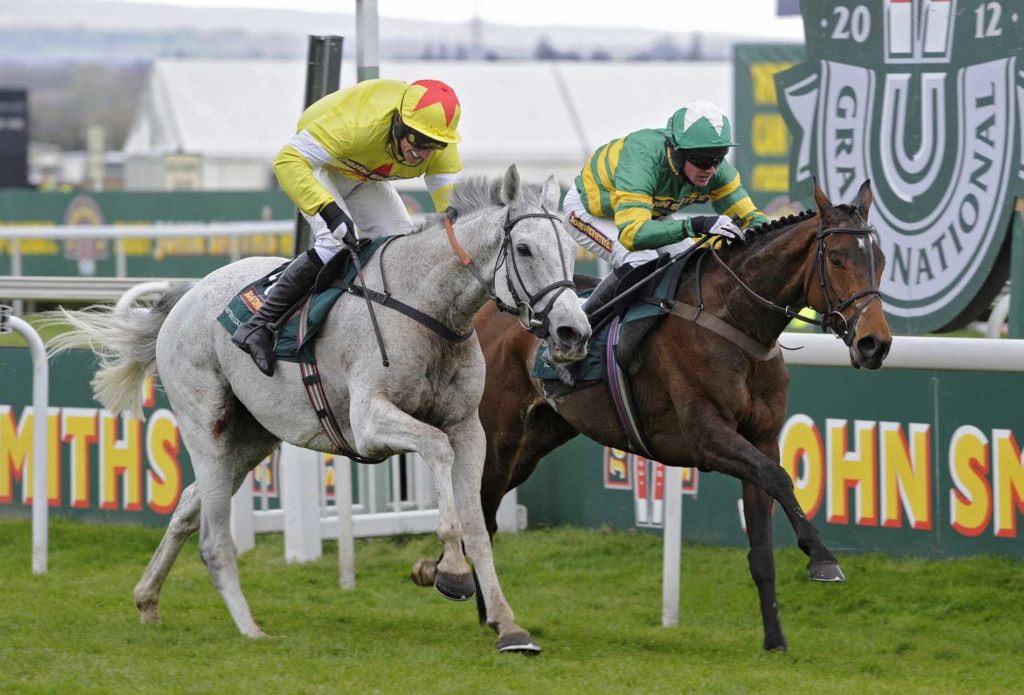 Neptune Collonges (left) and Sunnyhillboy flash past the winning line as one – Photo: George Selwyn

Success in the 2012 Grand National looked unlikely for Neptune Collonges, having been ridden away by jockey Daryl Jacob as the starter sent the 40 runners on their way. What followed was a dramatic success as the grey got up in the final strides to deny Sunnyhillboy.

Katie Walsh on Seabass looked to have a real chance of a historic success until Sunnyhillboy and Richie McLernon took over, kicking clear at the elbow.

However, the race wasn’t over as Daryl Jacob roused Neptune Collonges to find a turn of foot that propelled him to snatch victory from the jaws of defeat by a nose, the closest-ever finish to the Grand National.

It was a first success in the race for trainer Paul Nicholls, Jacob and owner John Hales, who promptly announced that Neptune Collonges would be retired there and then after his herculean effort. 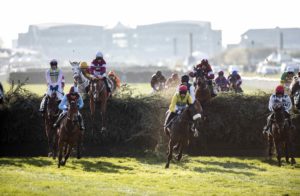 Up Next
Bookmakers to offer bets on virtual Grand National