One man and his dog (and quite a few horses)
Stories

County Limerick trainer Tom Hogan, who has barely a dozen horses under his care, broke new ground on Saturday when saddling his stable star Gordon Lord Byron to become the first European-trained horse to win a race in Sydney when taking the Group 1 George Ryder Stakes over 1500m at Rosehill.

Hogan’s compatriot Dermot Weld had set a similar milestone in Melbourne in 1993 when sending Vintage Crop to Flemington to win the Melbourne Cup. That win was a victory for one of Europe’s most powerful stables and owners (Michael Smurfit) but Gordon Lord Byron’s success is a triumph for the little man – which is very appropriate, Australia being a country which, by tradition, loves to see the ‘battler’ come good.

Admittedly Gordon Lord Byron is nowadays part-owned by Cyrus Poonawalla, one of the world’s wealthiest men and easily the most successful owner and breeder in his native India. The horse’s original owners, the Cahalan family, though, still own a share in him, and they bought him from his breeder Roland Alder as a weanling at Goffs in November 2008 for a mere €2,000.

The plan when the Calahans bought the Byron colt – whom they later named Gordon Lord Byron – was that he was being pinhooked for re-sale the following autumn. However, when they offered the yearling at the Orby Sale in September 2009, he was led out unsold at €5,000. The result was that they decided, presumably at least semi-reluctantly, to put him into training with local trainer Tom Hogan – and they must have been thanking their lucky stars ever since then that they did, as their horse (now a gelding) has won a Group 1 race in each of the last three years and has given them some great trips to England, France, Hong Kong and now Australia.

Gordon Lord Byron’s presence in Sydney is a sign of the effort being made there to raise the profile of the Sydney Autumn Carnival, which in recent years has been lagging behind Melbourne as regards prestige and quality of racing. A similar move was made in the late ’80s when the Sydney Turf Club poured fortunes into its principal weight-for-age race, the STC Tancred Stakes (now the BMW, and for a time around the turn of the century the Mercedes Classic), in a bid to attract overseas challengers. A few came and nearly conquered – and now Gordon Lord Byron has broken through.

In 1988, John Dunlop sent Highland Chieftain down under from England for the Tancred, and Patrick Biancone sent Vaguely Pleasant from France. The pair, who were far removed from the top class in Europe, were sent off as the rank outsiders – but filled the placings behind the best horse in Australia, the Bart Cummings-trained champion Beau Zam (who did, admittedly, win by a wide margin).

In 1989, Clive Brittain sent Top Class to Sydney for the Tancred – and the Walter Swinburn-ridden four-year-old finished second, beaten only three quarters of a length by the Cox Plate winner (Our) Poetic Prince.

In 1990, Highland Chieftain was in the field again, as well as the Clive Brittain-trained Mountain Kingdom, with the latter finishing fourth behind the Caulfield Cup winner Sydeston, immediately in front of the top-liners Dr Grace and Better Loosen Up.

Gordon Lord Byron is a superior horse to those middle-distance performers who had made the trip previously, and it is good to see the boldness of his connections rewarded. He will now bid to collect some more Aussie dollars in the Group One Doncaster Mile at Randwick on Saturday 12th April. 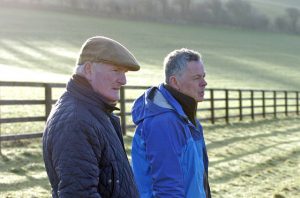