A £75,000 gamble by owner-breeder Anthony Oppenheimer to supplement Golden Horn for the Investec Derby paid dividends in brilliant fashion when the unbeaten Cape Cross colt took Flat racing’s greatest prize in scintillating fashion in front of a 125,000-strong crowd.

Hans Holbein set a demanding pace in the Epsom Classic and the winner, giving Frankie Dettori a second Derby success, had to make up some ten lengths turning around Tattenham Corner into the home straight.

But Golden Horn responded gamely as he cruised past stablemate Jack Hobbs to score by three and a half lengths. The William Haggas-trained Storm The Stars stayed on for third.

It was 18 years since John Gosden won the race with Benny The Dip and he reflected: “I thought Golden Horn was quite keen early in the race and took Frankie on, but he dropped him in and it was fine. The last thing I said to him beforehand was ‘ride a cool race’ and he did just that. He waited and waited.

“Jack Hobbs ran a superb race – he was beautifully balanced by William (Buick) down the hill and into the straight, and all being well, he can run in the Irish Derby. Golden Horn isn’t in the Irish Derby and we will talk about the Eclipse for him.”

Gosden stated that he never had any great doubt that Golden Horn would stay the Derby trip, highlighting the three-year-old’s temperament.

“William said in the Dante that Golden Horn hit the line strong. I think that is a key factor. Another key factor is that, like his sire Cape Cross, he is very, very laid back and a relaxed horse – except for the first furlong today!” added Gosden.

“Mr Oppenheimer kindly put the winnings up from York to supplement him so thank you to him for that. We talked after York about supplementing and then we talked on the phone but Mr Oppenheimer had already made his mind up so I didn’t have to say ‘please’ or ‘could we?’. I think he wanted to see how the horse came out of the race which is a pretty good idea before you stump up £75,000 to supplement a horse for a race!”

It was the first 1-2 for a trainer in the Derby since Aidan O’Brien’s High Chaparral beat Hawk Wing in 2002 and Gosden had always held the pair in high esteem.

“I liked both horses a lot from the start. August 23 is a date ingrained on my mind as they did a piece of work together on the Limekilns and, when a piece of work goes wrong, it really goes wrong and this went wrong,” added the Newmarket handler.

“Both horses overdid themselves in a tender stage of their development, when they’re growing and everything else. I wasn’t a happy bunny that day and actually I packed them both in for a month – I just left them totally alone which is why one didn’t run until the end of October (Golden Horn who won at Nottingham) and the other until we’d finished our Christmas pudding on 27 December (Jack Hobbs, who won at Wolverhampton).”

Golden Horn was Dettori’s 20th mount in the Classic and he admitted that – now aged 44 – he relished this victory more than ever.

“When you are younger you do it, you don’t really appreciate the full force of the Derby. It’s a huge race and you don’t understand the meaning of the pressure, the importance – it means a lot,” said Dettori, who previously won the race in 2007 with Authorized.

“It’s unbelievable. I still can’t believe that I have won the Derby again. What a feeling! It was brilliant, the horse was magnificent. I was just a passenger. He flew into the last bit, it was good. He hit a flat spot and then, once he found top gear, that was it – he was off. It was a brilliant feeling and I had to pinch myself, I couldn’t believe it.”

For Oppenheimer it was the pinnacle of a breeding operation that was begun over half a century ago by his father Sir Philip and operates out of Hascombe and Valiant Studs at Cheveley near Newmarket.

“I have all my family, including three grandchildren, here which makes it so special,” said Oppenheimer. “We have won Classics before but the Derby is different, it’s THE race you want to win. I joined my father over 30 years ago and he had been trying to win the race for longer than that. It’s something that we have both aspired to.

“We’ve made up for that now, and it’s more exciting because we’ve been trying for so long. I’m not getting any younger. I’m immensely happy.”

Oppenheimer stated that it had been an easy decision to pay the Derby supplementary entry fee after Golden Horn’s Dante Stakes victory.

“I didn’t take much persuading to supplement him,” he added. “At the end of the Dante, he wasn’t stopping and that race is a little bit over a mile and two furlongs so I thought that we’re nearly at a mile and three, it’s a bit of a no-brainer to go for the best race in the world. So we said ‘off you go’. I had total confidence in the trainer and jockey.” 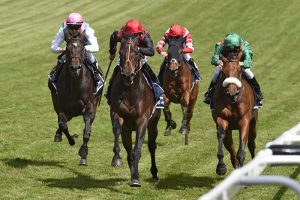 Up Next
Moon rises to defeat French duo