Cheltenham Gold Cup contenders Lord Windermere and Carlingford Lough have been allotted joint top-weight of 11st 10lb in the Crabbie’s Grand National at Aintree on April 11.

The latter is owned by JP McManus, although his retained jockey, the soon-to-retire AP McCoy, is expected to choose another McManus runner in Shutthefrontdoor (11st 2lb) as his farewell National ride. McCoy and McManus teamed up to win the National in 2010 with Don’t Push It.

Pineau De Re (11st) will have to defy an 8lb rise in the handicap if he is to repeat last year’s heroics for the Richard Newland stable, while Balthazar King (11st 2lb), runner-up in 2014, is 3lb higher and expected to head straight to the race.

With the McCoy factor sure to generate considerable extra interest in the wider media, Channel 4 will be confident of topping last year’s audience, which peaked at 8.5 million viewers.

The broadcaster has come under fire for alienating viewers since inheriting races previously shown on the BBC – the last Grand National shown on the BBC, in 2012, achieved a peak audience of 10.9 million viewers. 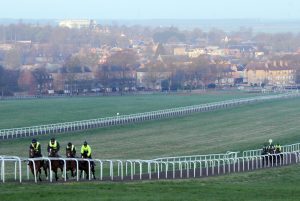 Up Next
Future Champions Day is re-vamped