By The Owner Breeder staff 05 September 2014

You have taken the decision to enter the training ranks. Is training something you have always hankered after?

Yes, absolutely. I have always wanted and intended to train. I suppose you could say that I am doing things back to front. Other people seem to go from training to racehorse management or being bloodstock agents, but I have gone from being assistant trainer to racing journalist, bloodstock advisor, administrator and racing manager. I am really pleased to at last have the chance – it’s never too late.

Do you see yourself as well-qualified for the job, having worked with Sir Mark Prescott and John Dunlop before managing the all-powerful Godolphin operation?

That is for others to judge. But I feel fortunate to have worked with some fantastic people. In addition to Sir Mark Prescott and John Dunlop, I have also worked with Saeed bin Suroor, John Gosden, Andre Fabre, David Loder and Mark Johnston.

I must have worked with more than 100 trainers over the last 25 years and I have also worked with some of the best vets and farriers in the world, along with jockeys and work riders. The most important thing I have learned is that success comes with the best stable management.

What is the timescale for your plans to set up in part of Clive Brittain’s Carlburg Stables in Newmarket?

We will be looking to move in during late autumn. Clive and Maureen have been so kind to allow me to rent some boxes and I would like to call the yard Calne Stables, as that is what Clive was known as during his 23 years working for Sir Noel Murless.

In a perfect world, we would have our first runners in Dubai this winter. Whatever happens, we will be fully up and running for the 2015 Flat season.

What sort of horses do you want to train and how many?

Winners, ideally! One of the things I enjoyed most working first for Anthony Stroud at Darley and then for Godolphin was following particular families, getting to know them through the generations and getting the best out of them.

Having also worked on stallion and private stud farms, I am conscious of how much owner/breeders know and understand about their horses. Those are the sort of people I would love to train for because, like me, they want to maximise the potential of each horse and they know how important it is to give their horses the time they need.

I think 50 horses is a realistic and manageable number for a first-season trainer. I know that training is going to be a very tough job and I am prepared for that. I shall relish the challenge.

Did Sheikh Mohammed give you his blessing when you told him you were going to start training? What did you learn from working with him?

Sheikh Mohammed has given me tremendous encouragement and support. In terms of what I have learned from him, I would highlight outstanding horsemanship, always putting the horse first and having patience.

He understands racing and loves to win and always told me the secret to success in a racing stable were the three ‘Ps’ – planning, perfection and patience. He would probably say that he also taught me that, like everyone, I can be wrong sometimes.

You are setting up your own business as a trainer. How do you structure the financial side of the operation when you have horses to buy and staff to pay, even before you have runners?

I am making a significant personal investment on the basis that I believe we have all the ingredients in place to be successful. I have prepared a business plan and consulted financial advisors as to how this new project can best work.

However, at the outset much obviously depends on the number of horses I receive. The trainers’ course at the British Racing School has given me invaluable advice on how to run my business.

Your time at Godolphin spanned two decades. Is there one moment, or horse, that stands out?

It was a privilege to work for Godolphin, and to have been involved with more than 200 Group 1 winners is remarkable. It was also wonderful to be centrally involved in what was the first truly international racing stable.

Sheikh Mohammed really changed racing with the concept of keeping older horses in training. I absolutely loved being involved with planning campaigns over several seasons for some great horses.

Dubai Millennium was clearly the outstanding horse. If I had to pick one moment, though, it would be Lammtarra winning the Derby first time out in 1995 after no end of problems throughout the winter.

At one stage, Sheikh Mohammed was the only person who thought we should persevere and try to get Lammtarra to Epsom. To win such a big race against all the odds made that a very special day.

What do you think was your biggest achievement at Godolphin?

Others may have a view on that, but from my perspective the whole ethos of Godolphin is that it is a team. For me, Godolphin’s principal achievement was representing Dubai on the world stage to the highest standards and helping to develop it into the sports capital of the Middle East.

Also it was fantastic that Godolphin created so many great stallions for Darley.

During all the drama of the Mahmood Al Zarooni doping situation there was a lot of pressure on you. How do you reflect on what happened during that period?

It was a dreadful situation for Sheikh Mohammed, who was so badly let down, and for British racing. I am pleased it is now in the past.

Before you started working for Sheikh Mohammed in 1989, you were the Racing Post’s Newmarket correspondent. Does your journalistic background mean you are less sensitive to what is written about you in the media?

Certainly not. But it helps me to understand the media and how it works. I think racing in Britain is so lucky with the coverage it enjoys.

Thanks to the tuition of Howard Wright and other experienced journalists I can still spot a story a mile away before it happens and I have always found that to be very useful.

Did you always want to work with horses or in racing when you were young?

Yes. What kicked it off was a visit to Plumpton in 1968 when I was six, and also watching Brian Fletcher win the Grand National on Red Alligator in the same year.

After that horses and racing were the centre of my universe, although initially I wanted to be a commentator. Later on when John Dunlop and Sir Mark started me off all I wanted to do was train horses and be involved in racing.

Which is your favourite racecourse in the world, and what makes it so special?

Goodwood, both aesthetically and sentimentally. I grew up in the area and used to go racing there from a young age. Glorious Goodwood is exactly that and Godolphin had many successes at the course during my time there. I hope I can have one or two there myself.

Where would you like to be professionally in five years time?

I would be very happy if I were still in business, respected by my peers and doing a good job for a great team of owners and staff. 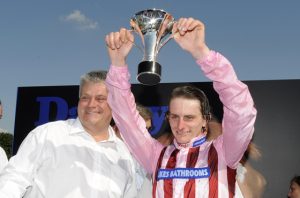 Up Next
Straight talker