A record-breaking final session of Goffs’ Foal Sale saw a first-crop Sea The Stars colt take top billing when each was knocked down for 850,000gns, the highest price ever paid for a foal in Ireland.

The close relation to Soldier Of Fortune and Heliostatic, both of whom are by Sea The Stars’ half-brother Galileo, was consigned as lot 734 by Jim Bolger’s Redmondstown Stud and knocked down to John Clarke, bloodstock adviser to Christopher Tsui.

A filly by Sea The Stars had made the early running on the third day of the sale when lot 581, the second foal of dual Classic winner Finsceal Beo, was sold by Michael Ryan’s Al Eile Stud to John McCormack. Ryan’s daughter of Mr Greeley, who has a yearling colt by Galileo, was trained by Jim Bolger, and his Redmondstown Stud was in the thick of the action once again when selling another Sea The Stars filly,  a half-sister to 1,000 Guineas runner-up Cuis Ghaire, also for €800,000 to Ibrahim Araci.

A six-time Group 1 winner in 2009, Sea The Stars, whose stud fee for his third season at Gilltown Stud will remain at €85,000, dominated the last day of foal trade at Goffs, with five of the seven top lots all emanating from his first crop.

Of the five foals by the former Horse of the Year offered during the closing day of the sale, all sold for six-figure sums at an average of €572,000, and three hailed from Redmondstown Stud.

Following on from the extraordinary prices registered for broodmares in Kentucky, the buoyant trade for foals at Goffs, which saw a 42% rise in aggregate on the 2010 sale, plus advances in both average and median figures, bodes well for England’s biggest breeding stock auction, which starts next Wednesday, November 23, at Tattersalls. 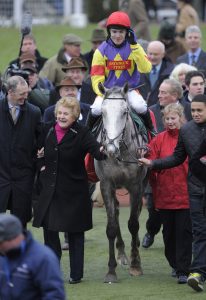 Up Next
Trio of chasing debutants set season alight