Earmarked as one of the stars of the second day of Book 1 of the Tattersalls October Yearling Sale, Group 1 heroine Intricately’s first foal more than lived up to that billing when bought by Anthony Stroud for 1,100,000gns.

The Dubawi colt was bred by Mike and Michelle Morris, who purchased Intricately – winner of the 2016 Moyglare Stud Stakes – through John and Jake Warren for 1.7 million guineas at the Tattersalls December Mares Sale in 2017.

Given the best start to her broodmare career, Intricately visited Darley’s flagship sire for her first cover and Jake Warren said: “He really was as good a first foal as you would wish to see. She has got a colt foal who is equally as good who might be coming back here next year, and she is in foal to Kingman.

“Down the line some of the progeny might be kept to race, but the mare owes a few quid, so she needs to clear the balance sheet first! And she needs to produce a filly!”

Reflecting on breaching the seven-figure barrier with the near black colt, Warren added: “It is a real group affair, a lot of teamwork is involved in this. Mike and Michelle bought the mare, she is a beautiful quality mare.

“She has a stallion in her pedigree [Rock Of Gibraltar], she was a Group 1 two-year-old winner, she is by one of the best stallions in the world and she is an outstanding looker. She had everything as a broodmare, which is why we stepped up to buy her then. And she has done nothing but please us since.

“It is testament to that, and to the efforts by Stud Manager Rachel Spindlow and the staff at Highclere.

“It was the intention through this process to be playing at this end of the table and thank you very much to Anthony Stroud for buying him. I want to say thank you to him and the underbidder – he is a fantastic horse, and it was wonderful that two people valued him to such a level.”

Stroud was of course acting on behalf of Godolphin and just five lots after securing Intricately’s Dubawi colt, he went to 525,000gns on behalf of Sheikh Mohammed’s operation for New England Stud’s Dubawi colt out of Jacqueline Quest.

Godolphin know the family well as the colt’s half-brother was the late Breeders’ Cup Juvenile Turf hero Line Of Duty, trained by Charlie Appleby, while the colt is a full brother to the Listed-winning Onassis.

There was more success for Highclere Stud later in Wednesday’s session as the breeder of a Siyouni half-sister to Lancashire Oaks scorer Horseplay and Listed winner More Mischief, bought by Tom Goff of Blandford Bloodstock on behalf of Georg von Opel’s Westerberg outfit.

Plans call for the filly to head into training with John Gosden and Goff said: “She’s for Westerberg. She’s an absolute queen with a lovely outcross pedigree.”

Nicholas Jones’ Coln Valley Stud has benefitted greatly from the 180,000gns purchase of Gryada in 2006 and on Wednesday her influence continued to be felt as she featured as the granddam of Jones’ Dubawi colt that made 800,000gns.

The colt is out of Gryada’s winning Galileo daughter Great And Small, which makes her a close relation of the multiple Group 1 winner Fame And Glory. This was another purchase made by Stroud for Godolphin.

Jones said: “I’m delighted but it’s such a never-wracking game. Those few seconds in there – well that’s the revenue for the rest of the year. I bought Gryada in 2006 – she had originally come from Lord Howard de Walden’s estate – and she was quite old by then.

“But I got three daughters out of her and they’ve all had good colts that I’ve been able to bring here. Great And Small has a full-brother to this colt, which I hope to be able to sell here next year, and is in foal to Bated Breath.

“We’re a small stud but we love it, and I’m lucky to have a great team. Gryada has given us enormous excitement. She allowed us to upgrade the stallions we used. I don’t know what will happen with stud fees this year.

“The top mares will still need to go to the top stallions, but I think everything will still have to come down.”

Another high-profile purchase was a 900,000gns outlay for the Hillwood Stud consigned Lope De Vega colt out of the Listed-winning Teofilo mare Moi Meme, which provided Fortescue Bloodstock with a memorable day in the ring.

Charlie Vigors, a key part of the group, was thrilled with the result and said: “It’s beyond our wildest dreams. We knew there was plenty of interest in him and there was plenty of live money in there at around the 400-500,000gns mark. And then you just need two people to hook up after that.

“He was bred at home and has been a lovely horse all along. It’ll certainly be a day that all involved with Fortescue Bloodstock will enjoy. It’s a syndicate of investors, mainly London-based, and the idea was to buy high dollar mares – we have three at the moment.

“She’s [Moi Meme] been married to Lope De Vega mainly because they have all been so nice. I know Andrew thinks a lot of King Vega and I think the plan is to run him next in the Vertem Futurity providing the ground is ok. The mare also has a lovely Lope De Vega foal at home and is back in foal to him.

“We initially picked him because we felt he was a sire on the up. This colt was bred off a fee of €60,000 so it’s been a good payday – but then you need results like this to be able to keep going back to him!” 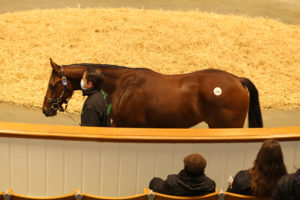 Up Next
Roger Varian to train 2,700,000gns Kingman half-brother to Galileo Gold