A Kingman half-sister to exciting two-year-old Native Trail breathed life into the opening session of the Arqana August Sale in Deauville on Saturday when snapped up by Godolphin for €950,000.

On a night when the key metrics fell well adrift of the levels set on the corresponding day in 2019 – a time, of course, when the world had yet to adapt to the menace of Covid – she was one of three yearlings to make €600,000 or more and captured a productive night for Godolphin that consisted of the purchase of three yearlings for a total of €1.5 million.

The session-topper came under the hammer in possession of a live update as a half-sister to the unbeaten Group 2 Superlative Stakes winner Native Trail and thus with that colt’s future burning bright with potential, it was no surprise to see Godolphin, fronted by agent Anthony Stroud, return to the well to seal the deal with a €950,000 bid.

“She is a very beautiful filly and Kingman has nothing more to prove to anyone today,” said Stroud. “Godolphin also owns her two-year-old brother, whom we are very happy with. It’s a very Juddmonte family, she has the pedigree, the good conformation and she will be very valuable after her racing career. We really wanted her.” 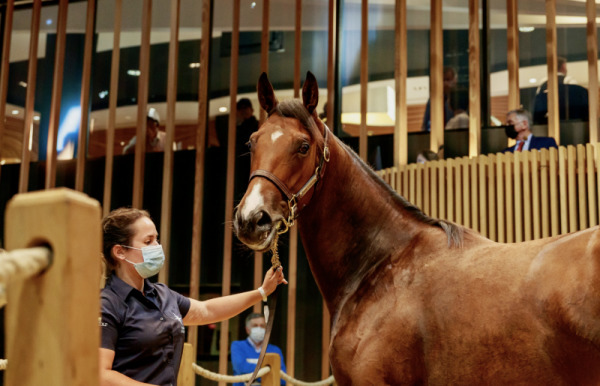 Godolphin went to €950,000 for this Kingman half-sister to Native Trail. Photo – Arqana

It was a momentous result for vendor Haras d’Haspel, which bred the filly out of Needleleaf, a daughter of Observatory purchased through MAB Agency for 60,000gns in 2015. Although unraced, Needleleaf boasts fine connections as a sister to top sprinter African Rose, the dam of Group 3 winner Fair Eva, and Group 3 winner Helleborine, herself dam of Calyx, the first brilliant performer sired by Kingman.

The Kingman filly is the third foal out of Needleleaf.

José Delmotte of Haras d’Haspel was understandably delighted with the result. He said: “First of all, I would like to thank my daughter, my son-in-law and the entire stud team because all this would not be possible without them.

“I was really caught between the different buyers bidding against each other, I didn’t look at the price! It is the culmination of a lot of time, a lot of sacrifice and investment. We will continue in this direction and we hope that it will continue to smile at us!”

Another gift courtesy of the Gold Round family came the way of Ecurie des Monceaux and LNJ Foxwoods early on in the session thanks to the sale of a Dubawi colt for €750,000 to Oliver St Lawrence.

It was back in 2012 that the Roth family’s LNJ Foxwoods went to €520,000 through Solis Bloodstock for the regally related stakes producer Gold Round, then a 15-year-old, and rewards were swiftly forthcoming when the half-sister to Goldikova threw Group 3 winner Golden Valentine for her new connections. The daughter of Dalakhani, a sister to Group 3 winner Goldwaki and one of a select group of horses to carry the LNJ Foxwoods colours in France, enjoyed her finest moment when successful in the Prix Minerve during Deauville’s summer meeting of 2016.

On Saturday, it was the turn of Golden Valentine’s second foal, bred by LNJ Foxwoods in partnership with vendor Ecurie des Monceaux, to take centre stage at Arqana with his €750,000 sale to St Lawrence, acting on behalf of KHK Racing.

“He is a very beautiful colt and a son of Dubawi,” said St Lawrence. “I bought him for KHK Racing. He will go to England but we don’t know where he will go in training yet, we’ll decide soon!”

It was at this sale last year, when staged in September, that St Lawrence went to a sale-topping €2.5 million on behalf of KHK Racing and HH Shaikh Nasser Al Khalifa for Pure Dignity, a Dubawi half-sister to Sottsass and Sistercharlie. Now with Roger Varian, she possesses several early Group 1 entries. 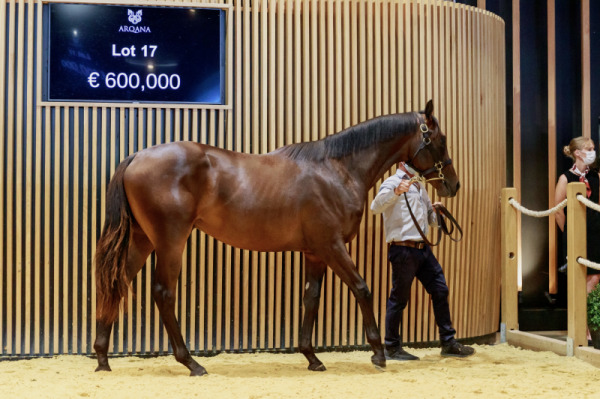 Only one yearling by the late Galileo passed through the ring on Saturday evening and in what was another high-profile sale for breeder Ecurie des Monceaux, the filly in question was duly well received, selling for €600,000 to David Redvers.

The filly is a half-brother to Group 3 winner Wind Chimes, one of the best sired by the recently deceased Mastercraftsman who also ran third in the 2018 Poule d’Essai des Pouliches, and out of the Listed-placed Militante, by Johannesburg.

“She is a superb filly with a solid physique,” said Redvers. “She is a daughter of the exceptional Galileo and she comes from one of the best French breeders.

“I’m hopeful about her, she has everything we’re looking for, we’re really happy. We haven’t decided on her trainer yet, but she will stay in France.”

Wind Chimes’ first foal, a Galileo colt bred by Coolmore, is set to sell tomorrow as Lot 114 as part of the Haras des Capucines draft.

Arqana made a concerted effort to attract American buyers to the sale, going as far as to organise a jet out of Saratoga to Deauville. Successful owners Jack Wolf and Craig Bernick were among those to reward those efforts, partnering to pay €175,000 for an Australia granddaughter of top two-year-old Pas De Reponse through De Burgh Equine.

The sale continues on Sunday. 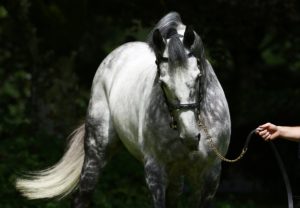 Up Next
Death of Coolmore stallion Mastercraftsman