Following testing of all horses at both of Godolphin’s Newmarket training yards, the BHA has announced that a further seven horses at Moulton Paddocks, formerly overseen by trainer Mahmood Al Zarooni, have tested positive for the anabolic steroid stanozolol.

Following the initial 11 positive results from 45 horses tested at Mahmood Al Zarooni’s stable under the BHA’s testing in training programme on April 9, a total of 391 horses have now been tested, with those falling under Saeed bin Suroor’s management at Godolphin Stables all returning negative tests. Bin Suroor has now been given clearance by the BHA to take over the licence at Moulton Paddocks until a permanent trainer is appointed.

A statement issued by the BHA read: “Godolphin and, via his solicitors, Mahmood Al Zarooni have been informed of the test results. Both Godolphin and Mahmood Al Zarooni have also been notified that they have the option within the Rules to ask that the relevant samples be subjected to B sample analysis. Both parties have until Thursday, May 23 to confirm if they wish to take up this option.

“In line with the restrictions imposed on the 15 horses identified as having been administered anabolic steroids in the initial investigation, and subject to confirmation should the B samples be sent for counter-analysis, the seven horses will be suspended from running in Britain for a period of six months from the date the samples were taken. As such the above horses would not be permitted to resume racing until October 29, 2013. Any of these horses may be subjected to further sampling, as directed by the BHA, prior to them resuming racing.”

Mahmood Al Zarooni was banned from racing for eight years at a disciplinary hearing in London on April 25. He has subsequently lodged an appeal as to the severity of his sentence.

BHA Chief Executive Paul Bittar commented:   ”These test results endorse the swift action and measures taken by the BHA in this matter. Whatever the outcome of his appeal before the independent Appeal Board, the gravity and scale of the infringements warranted Mahmood Al Zarooni being removed from control of the yard as quickly as possible.”

In a statement on Godolphin’s website, Racing Manager Simon Crisford said: “It is obviously very disappointing that seven further horses have tested positive for stanozolol.

“These results highlight why H.H. Sheikh Mohammed took the decision to lock down the stables at Moulton Paddocks until every Godolphin horse in training at Newmarket had been tested.

“All of Saeed bin Suroor’s horses have tested clear and we are working with the BHA to put everything back in order at Moulton Paddocks.” 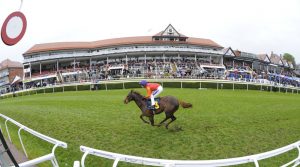 Up Next
Dandy Man romps to an impressive lead