A significant blow was dealt to Irish powerhouse trainer Willie Mullins as one of the biggest owners in National Hunt racing – Gigginstown House Stud – announced the removal of it’s horses from his County Carlow base.

In what has been described as a shock move, Michael O’Leary who runs the Gigginstown operation with his brother Eddie made the decision on the back of a dispute over training fees.

Two lorry loads were seen departing the premises yesterday signalling the start of the exodus which will see 60 horses disperse. The dispute is linked to the fact that Mullins has raised his training fees for the first time in a decade.

The Mullins-Gigginstown combination had struck up 16 Grade 1 victories during a seven-year association, sealing 11 Punchestown Festival wins and four victories at the Cheltenham Festival in the process.

Of the 60 horses, Lexus Chase winner Don Poli and Apple’s Jade will be moving to Gordon Elliot’s yard, Closutton’s nearest rival. The latter, a four-year-old daughter of Saddler Maker won two Grade 1 juvenile hurdles at the Aintree and Punchestown festival’s back in the spring.

Elliott said: “It’s a massive boost and great for the yard getting so many new horses.

“It’s come as a surprise but we’ll try to do as best as we can with the new batch.”

Seven-year-old gelding Valseur Lido, who competed in some of the best Grade 1 staying chases last season but is perhaps best remembered for his unseating of Ruby Walsh in the Irish Gold Cup, is another of the departed.

Along with those stars, Mullins loses promising young types in the shape of Petit Mouchoir, Bello Conti and A Toi Phil to name but a handful.

With one third going to Elliott – who also trains Gigginstown’s Cheltenham Gold Cup hero Don Cossack – the rest are to be divided up among Henry de Bromhead, Mouse Morris, Noel Meade and Joseph O’Brien.

In a statement to RTE Sport, Gigginstown House said: “Gigginstown House Stud has been unable to reach agreement with Willie Mullins on an increase in training fees, we have agreed – with considerable regret – to move the Gigginstown horses to alternative trainers for the coming 2016-17 season.

“Gigginstown wishes to sincerely thank Willie and all the team at Closutton for the many Grade 1 races we have won together over the past seven years.” 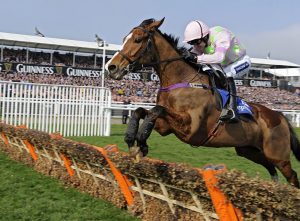 Up Next
Faugheen bets under investigation