On the back of an excellent final day of the Cheltenham Festival, Paul Townend’s purple patch continued at Limerick on Sunday. It was all topped off by his victory aboard Daisy’s Gift in the Grade 2 Charleville Cheese EBF Mares Novice Chase.

A daughter of Presenting, Daisy’s Gift was returning to the track after a fall in a novice chase at Thurles towards the end of last month.

Waited with in fourth in the early stages, she made her move on the inner after three out. The mare slipped through on the inside to take up the lead before two out.

The favourite, the Joseph O’Brien-trained Slowmotion, looked to bare down on her coming to the last and there was less than a length between them after clearing it.

Yet, the Willie Mullins charge battled on strongly on the short run in to claim the prize by a length and a half.

Townend also won on the Closutton inmate Kate Appleby Shoes earlier in the day and the Michael Hourigan-trained Donegal Tuesday made it a treble for the County Cork-born rider.

Only on Friday he was celebrating with wins in the County Hurdle on Arctic Fire and half and hour later in the Albert Bartlett Novices’ Hurdle aboard the Tony Bloom-owned Penhill.

“The luck is in I suppose. She got into a lovely rhythm with jumping, which was the key with her to get her jumping,” reflected Townend.

“She picked up nicely off the bend. To be fair to her she never missed a beat a bit slow the first couple but when she warmed up to it she got her confidence back.

The luck is in I suppose

“I thought I was in a bit of bother down the hill Jody [McGarvey] looked to be going really well. When I got the little gap on the inside my one picked up lovely and I knew we were in business.”

Daisy’s Gift, herself a Listed winner over hurdles, now makes it two wins over the larger obstacles with this by far her biggest win to date. 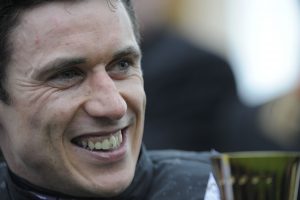 Up Next
Midlands National slog falls to Spud