The late Gerald Leigh could look down currently with great satisfaction, one of his families having thrown up a big-race winner on each of the past two weekends.

One of the best horses whom Leigh raced himself was his home-bred Known Fact colt Markofdistinction, who finished fourth behind Nashwan, Exbourne and Danehill in the 1989 2,000 Guineas before beating Distant Relative in the following year’s Queen Elizabeth II Stakes at Ascot. Markofdistinction was a son of the American-bred mare Ghislaine, and Leigh’s friendship with Alec Head subsequently led to various other descendants of Ghislaine being given names borne by members of the Head family. 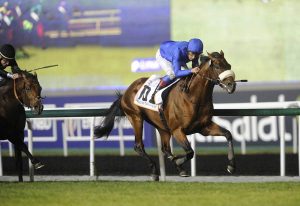 Markofesteem’s Shirley Heights half-sister, born in 1987, was named Ahead, and she now ranks as the dam of Opinion Poll, winner for Godolphin of the Dubai Gold Cup at Meydan seven days ago on Dubai World Cup Night. Ahead had a full-sister named Criquette, winner as a two-year-old in 1992 in Leigh’s colours of the Radley Stakes (Listed) at Newbury after finishing second on debut in the Kensington Palace Stakes at Ascot behind Thawakib, who subsequently won the Ribblesdale Stakes before becoming the dam of the 2001 Prix de l’Arc de Triomphe winner Sakhee.

After Criquette had passed into the ownership of Sheikh Maktoum al Maktoum’s Gainsborough Stud, she visited Sadler’s Wells in 1996, producing Sky Song, who was trained in France by Nicolas Clement. Sky Song visited Daylami in 2002 to produce Right Note, a winner at Chantilly in 2005 for Gainsborough when trained, appropriately, by Criquette Head’s son-in-law Carlos Laffon-Parias.

With Sheikh Maktoum’s bloodstock having been taken over by his brother Sheikh Mohammed after the former’s death, Right Note was sent to join Darley’s Australian broodmare band in New South Wales. There she was covered in 2008 by Lonhro, who had joined the Darley roster when Sheikh Mohammed had bought Woodlands Stud earlier that year. The result of this mating was Pierro – winner today of the southern hemisphere’s premier two-year-old race, the Golden Slipper at Rosehill.

Although bred by Darley, Pierro is raced by Mr and Mrs Greg Kolivos, on whose behalf the colt’s trainer Gai Waterhouse bought him for $230,000 at last year’s Magic Millions Yearling Sale at the Gold Coast in Queensland. He was consigned there by Musk Creek Farm in Victoria, having been bought from his breeder by David Kobritz for $115,000 at the 2010 Magic Millions National Weanlings Sale.

Pierro was ridden to victory in the Golden Slipper by Waterhouse’s principal jockey Nash Rawiller, who thus emulated his brother Brad, who won the race three years ago aboard Phelan Ready.

Up Next
Lucrative double for Ellison