No catching Godolphin entire as he breaks track record at Newmarket

Ghaiyyath’s relentless front-running tactics proved effective once again as the five-year-old powered to victory in the rearranged Group 1 Coronation Cup at Newmarket on Friday.

Having last been seen at Meydan in February when taking the Group 3 Dubai Millennium Stakes by eight and a half lengths, he immediately took the lead in the 1m4f contest.

There seemed to be no catching the son of Dubawi as the race entered its closing stages and despite the urgings of jockey Frankie Dettori, star stayer Stradivarius was unable to close the distance before entering the Rowley Mile’s famous dip.

Last year’s Derby hero Anthony Van Dyck began to gain ground but was unable to reduce the deficit in time, going down by two and half lengths to Ghaiyyath with a further two and a half lengths back to Stradivarius in third.

Ghaiyyath’s trainer Charlie Appleby said: “We’ve seen him at his best on a few occasions now and after the first half a mile, I fully respected the field in behind with Classic winners and multiple Group 1 winners in there, but could see William was in that rhythm and I was pretty confident he could maintain that to the line.

“I’ve always felt that we’re dealing with the finished article this year and I’m hopeful his post-race condition will be stronger than it has been when he was four. If that’s the case, then we might be able to back him up a bit quicker than we have done in previous years.”

Jockey William Buick added: “It was a very impressive performance from Ghaiyyath and he has done that before. He is a very explosive horse, who can also sustain a gallop. It was a deep field today – Stradivarius was coming back in trip, but he is still a very, very, good stayer with a turn of foot.

“Anthony Van Dyck is a Derby winner and Defoe won this race last year. It was a good race and a very good performance.

“He has phenomenal mid-race pace, a fantastic cruising speed, which I think is very rare to see in a horse that stays as well as he does. I don’t think I have ridden many horses that have as high a cruising speed as him. Coming back to a mile and a quarter wouldn’t pose any question to him at all.”

Front-running victories were the theme of the day at Newmarket as the Mark Johnston-trained Marie’s Diamond made every single yard to take the Listed Paradise Stakes for syndicate Middleham Park Racing in impressive fashion.

Saturday is set to be a big day for Roger Teal’s yard with Kenzai Warrior lining up in the QIPCO 2,000 Guineas and the stable’s form was handed a boost when Oxted landed the Group 3 Abernant Stakes.

It was a debut Group success for young jockey Cieren Fallon who will have a first Classic ride aboard the George Baker-trained Les Hogues in the QIPCO 1,000 Guineas on Sunday.

Stradivarius’s valiant third place in the Coronation Cup was preceded by an impressive performance from the Ed Walker-trained English King in Bjorn Nielsen’s colours in the Listed Derby Trial at Lingfield.

Slowly away from the stalls and slightly detached from the field as a frantic pace was set up front, English King was waited with by jockey Tom Marquand until a furlong from home when they were seen to be traveling ominously well.

Moved out for a clear run, the son of Camelot soon picked up and powered past Berkshire Rocco to win easily by two and three quarter lengths.

In the Listed Oaks Fillies’ Trial, victory went to the John Gosden-trained Miss Yoda who recorded a length and a quarter success over Golden Lips. 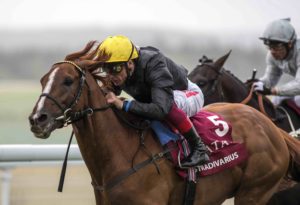 Up Next
Heavyweight clash at Newmarket