Group 1 winner Earthlight will also shuttle down under

Breeders in Australia will have the opportunity to utilise the services of Group 1 performers Ghaiyyath and Pinatubo after Darley Australia announced the pair will take up shuttle duties in 2021.

Earthlight, who shares his sire Shamardal with Pinatubo, will also be heading down under and will be based at Darley’s Northwood Park facility in Victoria alongside Dubawi’s son Ghaiyyath.

Pinatubo will stand at Darley’s Kelvinside base alongside Bivouac, who emulated his sire Exceed And Excel by winning last year’s Group 1 Newmarket Handicap and is being aimed at Royal Ascot before he retires to the breeding shed.

Managing Director Vin Cox said: “These four horses are of a quality that is as high as we could wish for. Any farm would take any one of them in a heartbeat.

“Each is an immaculately bred son of a prepotent sire. We are immensely proud to have them and can’t wait to offer these champions to breeders.”

Fees for the four new additions to Darley Australia’s roster will be announced at a later date. 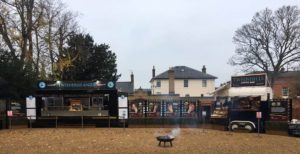 Up Next
Tweenhills takeaway vans raise funds for Racing Welfare