Mario Hofer – one of Germany’s leading trainers – has handled some top-class thoroughbreds during his time, including three-time Group 1-winner Pastorius, whose final success at the highest level came at Longchamp in the Prix Ganay in 2013.

The apple of his eye these days is Silvery Moon – not to be confused with his Yorkshire-based namesake trained by Tim Easterby – and while he has not exactly hit the dizzying heights of Pastorius, he is loved for his unique looks.

He liked the colour of the horse and it made him smile so he said why not, I’m going to buy him

Resembling an Ayrshire cow more than a thoroughbred, he is covered in large white and brown spots and his eyes are strikingly contrasting, too. His coloration is classed as ‘ovrero’ which is associated with pinto horses, a coloured breed most prevalent in America.

The five-year-old has created a media buzz in Germany, at a time when money in the sport has dwindled. He has arguably become one of, if not the most famous, horse in the country, and has achieved more than 8,500 likes on his Facebook page.

Hofer brought him as a yearling at the Arqana November Sales in 2012 for a price of €12,000, simply because he grew a liking to his looks, without much consideration for anything else.

“He liked the colour of the horse and it made him smile so he said why not, I’m going to buy him,” said Cey Bonhoff, assistant trainer.

“It certainly was not because of the paper or the breeding or some stuff, it was really because he liked him.”

Looks aside, Silvery Moon has actually proved an adept racehorse, his last victory in a nine-furlong handicap coming at Cologne on June 6. This took his career record to three wins and 16 places from 35 starts, earning just shy of £20,000 in the process.

One of his finest performances to date came in defeat on just his third start, when he finished runner-up in the Listed Preis Kolber Zweijahrigen Trophy at Cologne in 2013.

Silvery Moon is owned by the Stall Paint Horse partnership of Hofer, Prince Franz von Auersperg and Eckhard Sauren, who specifically commissioned their silks to match the colours of their thoroughbred. Sauren, Chairman of the Sauren Group and President of Cologne racecourse, has been a huge driving force behind Silvery Moon’s rise to fame and decided to invest after learning that he could actually run a bit.

His participation on racecourses throughout Germany has increased spectator crowds, to the extent that Sauren believes as much as 1,000 extra people come through the gates just to see him.

“There is a completely different atmosphere when he runs, everyone enjoys seeing a dappled horse compete against normal horses and he is always heavily backed,” reflected Sauren.

“What makes it even better is that Silvery Moon is such a great character. He seems to love kids and having his photo taken. When he wins it’s amazing, people are crying and shouting – it’s like he’s won the Derby!”

No doubt he owes most of his striking looks to his American sire, I Was Framed. The 14-year-old stallion standing at Rectory Farm in Cambridgeshire is one of only a couple of coloured thoroughbred stallions in Europe, and became the first coloured horse to be registered by Weatherbys.

Sauren is aware of a similar phenomenon taking place in Japan, where a four-year-old filly called Buchiko from the family of Sunday Silence has developed a huge fan base with her unique coat.

Like Silvery Moon, she has shown racecourse ability, winning four of her 13 starts including a creditable fifth in a Group 3 last year. Sauren dreams that one day he can get the two to compete against each other in a match race of the coloured thoroughbreds.

For the meantime, Silvery Moon will continue to race this season and draw many fans through the turnstiles.

“He won well last month but at Hamburg last time out he was unlucky because the ground was not so good for him, he doesn’t like the soft,” said Bonhoff.

“His trainer is really proud of the horse and I think he will certainly win more races.” 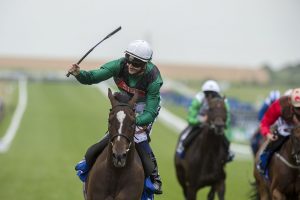 Up Next
Limato blows rivals away in July Cup