Trainer charged with seven rule breaches, including administering a product containing anabolic steroids to horses in his care

Gerard Butler is to face seven different charges by the BHA after nine horses in his stable tested positive for the prohibited substance stanozolol during a testing-in-training visit on February 20, 2013.

The Irish-born trainer, who is based at Egerton House Stables in Newmarket, admitted in a newspaper interview shortly after Mahmood Al Zarooni’s eight-year ban from racing that a number of his horses had been administered a product name Sungate, which contains the banned anabolic steroid stanozolol. Sungate is licensed in Italy and is only available for use in the UK if it has been imported under the Special Import Certificate scheme administered by the Veterinary Medicines Directorate.

No date has yet been set for the hearing at the BHA’s London headquarters where a disciplinary panel will consider Butler’s alleged rule breaches. They include “acting in a manner prejudicial to the integrity, proper conduct and/or good reputation of horseracing” by administering Sungate to horses himself by intra-articular injection (to a joint), a procedure which must only be carried out by a veterinary surgeon.

The horses to have tested positive for stanozolol are currently suspended from racing. They are A Touch Of Fashion, Flemish School, Azrag, La Belle Epoque, Rainbow Beauty, Zain Eagle, Zain Queen, Zai Spirit, and the Listed-placed three-time winner Prince Alzain.

A statement issued by the BHA on May 17 read, “The BHA became aware of the use of [Sungate] on horses in training following a visit to Gerard Butler’s yard in February 2013 as part of its testing in training sampling programme. Subsequently it became apparent that a veterinary practice, which had legally imported Sungate into the UK, had recommended its initial administration to horses in the care of Gerard Butler.

“The BHA has met with representatives of the veterinary practice in question. As a result of that meeting the BHA believes that Gerard Butler was not the only trainer to whom the administration of Sungate was recommended.

“Veterinary surgeons are not bound by the Rules of Racing, but are subject to their own rules of professional conduct. Therefore in order to establish the extent of the use of the product, BHA Investigating Officers will be interviewing trainers who are known to use the same veterinary practice. Under the Rules of Racing, licensed trainers are strictly liable for the administration of any prohibited substances administered to horses under their care and control.” 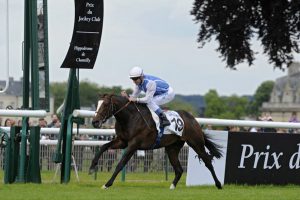 Up Next
Intello brings up Derby double for Galileo