As conditions deteriorated on the Sussex Downs – the Group 2 Qatar Goodwood Stakes – stirred the Goodwood racing fraternity from under their umbrellas to witness an exciting finish to the 2m showpiece on day three.

The Michael Bell-trained Big Orange, who was returning to the scene of his win in the same race 12 months ago, didn’t disappoint in proving victor yet again.

Taken to the lead from the outset, the son of Duke Of Marmalade set a decent pace while tracked in second by the only three-year-old in the race, Sword Fighter ridden by Colm O’Donoghue.

After steadying the pace on the turn into the straight, Jamie Spencer gradually upped the ante on Big Orange but was faced with a host of challengers in the final two furlongs as the field fanned out.

Despite being headed by Coolmore’s Sword Fighter, the five-year-old regained the lead inside the final furlong and stayed on gamely under pressure to score by just over a length from Pallasator and the Dave Simcock-trained Sheikhzayedroad.

Spencer hadn’t been aboard the gelding for his last two starts, the most recent being a success in the Princess of Wales’s Stakes at Newmarket’s July meeting when the New Zealand sensation James McDonald deputised.

July has so far proved fruitful for the 36-year-old, having partnered Deauville to victory for Aidan O’Brien in the Belmont Derby earlier in the month.

“You’ve got to always love a horse that wears his heart on his sleeve,” reflected Spencer.

“He’s a big strong galloper and he’s got stronger since last year and he’s able to sustain top speed for a lot longer.”

In what was a slow start to the season for Fitzroy House, their stable-star has lit up the place up in no uncertain terms. Now owner-breeder Bill Gredley’s hottest attraction, Big Orange will be targeted at staying contests at the highest level for the remainder of the season before a likely tilt at the Melbourne Cup once more.

“He’s just a star to have in the yard and we are so lucky to have him!”

He’s just a star to have in the yard and we are so lucky to have him!

Earlier in the afternoon, the Richard Hannon-trained Mehmas shouldered a 3lb penalty to win the Group 2 Qatar Richmond Stakes for Al Shaqab Racing.

The July Stakes winner – who now takes his tally to four wins from six starts – joined battle a furlong and a half out with Godolphin’s Blue Point, who took the field along in the early stages.

However, the son of Acclamation showed gritty determination to get on top in the closing stages, scoring by a neck under Frankie Dettori.

The Group 3 Lillie Langtry Stakes rounded off the stakes action, and saw the John Gosden-trained California take the 1m 6f contest by a comfortable half-a-length. The four-year-old daughter of Azamour took the step up to Group level in her stride, in what was to be another big success for jockey Rab Havlin.

After remaining handy in second behind stablemate Mill Springs, the filly picked up well inside the final furlong to see off all challengers by a length. 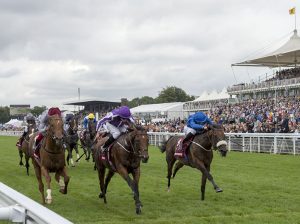 Up Next
The Gurkha claims gold in Sussex