Powerful buying partnership struck for A$1.8 million colt out of One More Honey at Magic Millions on Thursday

The belief of Phoenix Thoroughbreds and Tony Fung in Arrowfield Stud’s top sire Not A Single Doubt was further underlined at the third session of the Magic Millions Gold Coast Yearling Sale in Australia on Thursday.

Fresh from signing at A$1.1 million for a Not A Single Doubt colt on Wednesday, the powerful buying partnership came away with another two million dollar lots by the sire, including the session-topping A$1.8 million colt out of One More Honey.

“It was a phenomenal’s day trade again,” Magic Millions Managing Director Barry Bowditch reported. “The numbers across the board are just fantastic.

“We had another three million dollar horses today but buyers are getting into the market across all levels.

“There’s still plenty of great yearlings to come through the Book One catalogue over the next couple of days and importantly inspections start tomorrow for Book Two.”

Phoenix Thoroughbreds and Aquis Farm have already enjoyed immense success with the progeny of Not A Single Doubt as the owners of his standout colt Farnan. Bought for A$550,000 at Magic Millions as a yearling, Farnan captured last year’s Group 1 Golden Slipper Stakes, after which a share was sold to Kia Ora Stud in a deal that reportedly valued the colt at upwards of A$30 million.

Not A Single Doubt is the sire of 14 Group 1 winners overall and currently heads the Australian leading sires’ list. However, the son of Redoute’s Choice was pensioned at Arrowfield Stud last January, meaning that opportunities to purchase his stock are now limited.

The A$1.8 million colt, bought online by Phoenix’s Amer Abdulaziz, set a new auction high for his sire while turning a fine result for his vendor Emirates Park Stud, which paid just A$50,000 for his granddam One Funny Honey out of the Patinack Farm dispersal. He is the first foal out of One More Honey, who was raced by Emirates Park to win the Group 2 ATC Sweet Embrace Stakes.

“They are a limited edition, the Not a Single Doubt colts,” Aquis Farm Managing Director Shane McGrath, on behalf of the buyers, said. “He’s come off a great nursery – out of a very good racemare. Our partner in Dubai [Amer Abdulaziz] was up and watching and said he’d like to bid on the horse – that’s why we ended up bidding online.

“He’s a lovely colt. He was much admired with the price he made. That was right at our limit.”

And she’s sold for $1.2 million to @cmaherracing. We hope she can emulate her sister on the track! https://t.co/6Zp0l25hXo

Phoenix and Fung also went to A$1 million to secure Baramul Stud’s colt out of the winning Medaglia Valore, a Medaglia d’Oro daughter of Group 2 winner Military Rose.

An I Am Invincible sister to champion Loving Gaby became the most expensive filly of the sale when sold for A$1.2 million. Initially led out unsold, the filly was subsequently sold in a private transaction to join trainer Ciaron Maher and Next Level Syndication.

Offered by Kia Ora Stud, the filly is only the third foal out of the Group 2-placed Mastercraftsman mare Maastricht, whose first, Loving Gaby, won four races including the Group 1 Manikato and William Reid Stakes.

She maintained a strong sale for Yarraman Park Stud’s I Am Invincible, who falls behind only Not A Single Doubt among the auction’s leading sires following the sale of 29 yearlings for an average of A$561,897.

Not far behind with an exceptional average of A$506,667 is Haras d’Etreham’s Almanzor. The son of Wootton Bassett, who shuttles to Cambridge Stud in New Zealand, hit a new auction high on Thursday as the sire of a colt out of the Group 2-placed Lazumba, by Sebring, who sold out of the Bhima Thoroughbreds draft for A$800,000 to UItra Thoroughbred Racing and Baystone Farm.

The sale continues on Friday. 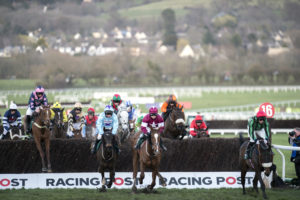 Up Next
BHA announces changes for amateur riders and hunter chases