After a challenging week in which her claim against fellow jockey Robbie Dunne was heard by the BHA judicial panel, Bryony Frost let her riding do the talking with a superb victory in Sandown’s headline contest on Saturday, the Grade 1 Tingle Creek Chase, aboard Greaneteen for owner Chris Giles and boss Paul Nicholls.

In truth it must have been a relief for Frost to have been able to focus on a horse race after all the headlines and column inches devoted to off-track matters.

Irish raider Chacun Pour Soi was all the rage in the betting market for the two-mile feature and jockey Patrick Mullins set out to make it a good test on Rich Ricci’s nine-year-old, trained by his father Willie.

Yet some indifferent leaps meant that the chasing pack were never too far behind, and the Policy Maker gelding was a spent force after jumping the third last fence.

Meanwhile, Frost brought Greaneteen to make his challenge on the outside after jumping two out and a fine effort at the final fence sealed the deal in style as the seven-year-old galloped on strongly to score by five and a half lengths from stable companion Hitman, who got the better of Captain Guinness for the runner-up spot.

Frost, who was given a rapturous reception on her way back to the winner’s enclosure as she celebrated her sixth top-level triumph, said: “I can’t tell you what it means. I was nearly in tears coming in. To feel the support of everyone here is huge and I could hardly talk to Alice [Plunkett, ITV] coming in because I wanted to appreciate everybody! 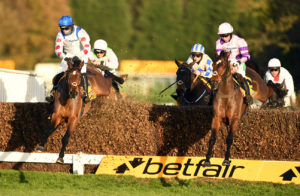 “They appreciate me, and I ride horses and it’s the best life. I can say I do that as a job and it’s a special place to be.

“When I landed after the last I thought somebody was going to come and get me. I could hear them and the crowd and I thought, ‘Oh my God! Someone has to get me’. He jumped and he travelled and I can’t tell you – it’s absolutely brilliant.

“Being on the back of a horse is the most blissful place you can be. You get to go out there and you jump and gallop and enjoy yourself.

“You let your thoughts go to the side and there’s no other place like it, when you’re gunning for him and he’s gunning for you, and you leave everything out there and ride and aim for that winning post.”

For trainer Nicholls it was a 12th victory in the Tingle Creek Chase on an afternoon when he enjoyed a treble, following the wins of Thomas Barr’s Highland Hunter (London National) and Samarrive (Listed December Handicap Hurdle) for Johnny de la Hey.

Earlier on the card, the Alan King-trained Edwardstone posted an impressive victory in the Grade 1 Henry VIII Novices’ Chase (2m). The seven-year-old Kayf Tara gelding, owned by Robert Abrey and Ian Thurtle, handled the testing ground best of all to score by 16 lengths from War Lord under Tom Cannon.

At Aintree, a thrilling finish to the Grade 3 Becher Chase saw the mare Snow Leopardess just last home from Hill Sixteen, with just a nose separating the first two home after three and a quarter miles on soft ground.

Protektorat, runner-up to Midnight Shadow in the Paddy Power Gold Cup last month, relished the step up to 3m1f to record an easy success in the Grade 2 Many Clouds Chase for Dan Skelton and Bridget Andrews.

His owners, who include Sir Alex Ferguson and Ged Mason, may well have a Cheltenham Gold Cup contender on their hands in the shape of the progressive six-year-old. 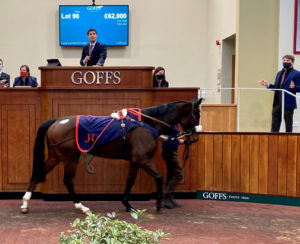