Sales catalogues: is the end nigh?
Stories

Britain and Ireland may have a greater array of big-name stallions but in recent years France has led the field when it comes to promoting the delights of its breeding industry. Of course luring visitors to Deauville in August doesn’t exactly require a hard sell, but Normandy in February is a different prospect.

However, the annual stallion marketing initiative La Route des Etalons has gone from strength to strength in the four years since its launch and this year saw more than 30 stud farms open their doors to visitors during the weekend of February 2 and 3.

With around 100 stallions available for viewing, there’s plenty to attract breeders and racing enthusiasts, but this year’s tour included an extra special jewel in the form of Australia’s former champion sire, Redoute’s Choice, who has left his home at Arrowfield Stud in the Hunter Valley for this first time since retirement from racing to stand at the Aga Khan’s Haras de Bonneval.

His book for 2013 already features such luminaries as Zarkava and Alpine Rose, whose Sea The Stars colt topped Arqana’s August Yearling Sale in 2012, and many of Europe’s leading owner/breeders have pledged support for the 16-year-old son of Danehill.

He’s a strong and handsome individual – a touch lighter than when previously viewed on his home turf but a long trip a fortnight ago and the cold of the Normandy winter will doubtless have played their part in this regard – and he drew plenty of interest during Haras de Bonneval’s opening hours. More than 350 visitors came to see Redoute’s Choice, including Niarchos manager Tim Richardson, trainer and breeder Francois Doumen, Mikel Delzangles and Alain de Royer Dupré.

Another among the French stallion ranks to have roused the interest of some major owner/breeders of late is Kendargent, the grey son of Kendor who has earned his reputation the hard way. Starting off covering a handful of his owner Guy Pariente’s mares, the Haras de Colleville resident last season attended a harem of 142 mates thanks to the eye-catching start made by his first juveniles, which was followed up in 2012 with yet more black-type performers in both his first and second crops.

The star among his offspring is undoubtedly Restiadargent, who was twice a Group winner at two before chasing home Black Caviar and Moonlight Cloud in the Group 1 Diamond Jubilee Stakes at Royal Ascot, finishing just half a length behind the acknowledged queen of world sprinting.

Restiadargent is set to remain in training in 2013 and she is currently on holiday alongside her sire at Haras de Colleville in Deauville. When she returns to a racing stable, however, it will not be to that of Henri-Alex Pantall as she is to be trained in Newmarket this season, though her owner is currently reluctant to divulge the identity of her new trainer.

One of the great delights of taking part in La Route des Etalons is not just the chance to see some world-class horses but also to have an inside look at some truly picturesque studs. It’s hard to beat the wood-beamed charm of rustic Norman architecture and even though the route involves plenty of driving, the many farms and orchards along the way rule out any potential boredom.

It’s hard to pick one stand-out stud farm. Haras du Quesnay is as beautiful as it is historic, and the Niarchos family’s Haras de Fresnay-le-Buffard, formerly home to Marcel Boussac, is another stunning property. Standing in glorious isolation at this farm is the Niarchos homebred Dream Well.

A much newer name on the list of French stallion studs but one which is quickly becoming a dominant force in Normandy is Haras de la Cauvinière. From just one stallion in 2010 – yet another Prix du Jockey-Club winner, Le Havre – it is now also home to Air Chief Marshal and this season’s new boy Rajsaman.

The latter, an Aga Khan-bred son of the former Jean-Luc Lagardere stallion Linamix, has all the traditional credentials necessary, including a grey coat, to succeed in the increasingly brave new world of the French stallion industry. 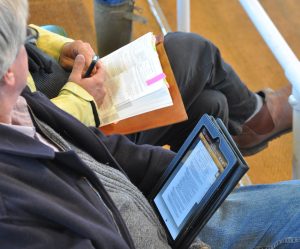 Up Next
Sales catalogues: is the end nigh?