Day to savour ahead of start of the Flat
Stories

Two game winning performances marked the finals of the EBF/TBA Mares’ Novices’ Chase and Novices’ Hurdle at Newbury on Saturday with Pepite Rose claiming her fourth consecutive victory in the former and fellow French-bred Tante Sissi holding off Heather Royal over the smaller obstacles.

Pepite Rose sails over the water jump at Newbury

Like so many decent French jumpers seen in the UK in recent years, five-year-old Pepite Rose started her career in the hands of Guillaume Macaire having been bought for €11,000 at Arqana’s December sale as a yearling. Subsequently changing hands privately in October 2010, she is now trained by Venetia Williams for whom she has won six times – twice over hurdles and her recent impressive successful streak over fences, with four wins in as many starts in just less than a month.

Pepite Rose’s victory in the Listed contest makes her only the second black type winner for her young sire Bonbon Rose, the other being Auteuil hurdles winner Nisaro De Cimbre, while Kauto Sweety, by Bonbon Rose out of Kauto Relstar, a half-sister to the great Kauto Star, has been Listed-placed.

Bonbon Rose, an 11-year-old son of Mansonnien now standing at Haras des Loges for €1,500, is a rare example of a National Hunt stallion who was top-class over jumps himself. He won eight of his 13 starts, including the Grade 1 Gras Savoye Prix F. Dufaure at Auteuil in 2005 for owner Sean Mulryan and trainer Arnaud Chaillé-Chaillé.

The Alan King-trained Tante Sissi, a daughter of the late Lyphard stallion Lesotho, has now won two hurdle races on the bounce plus a bumper last season for Thurloe Thoroughbreds. She too was formerly trained in France by her then owner and co-breeder Francois-Xavier Lefeuvre.

The race for the hurdles title was hotly contested despite a few notable absentees, such as Kentford Grey Lady and Synchronised’s half-sister Cross The Flags. Tante Sissi did well to hold off a determined-challenge from Nicky Henderson’s runner Heather Royal, who kept within half a length of her to the line despite a wayward finishing run from the winner. 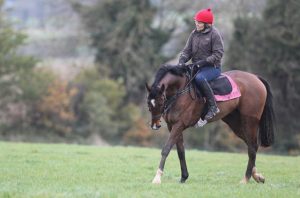 Up Next
Day to savour ahead of start of the Flat