Lifelong owner and breeder will succeed Paul Roy at the charity

By The Owner Breeder staff 29 September 2020

Philip Freedman will become the new Chair of Retraining of Racehorses on January 1, the British Horseracing Authority and ROR confirmed on Tuesday.

Freedman, a lifelong owner and breeder who most recently served as Chairperson of the Horsemen’s Group, will take over from Paul Roy, who has been in the role since 2013.

Prior to the coronavirus pandemic, in 2019 the charity offered over 500 educational events for the owners of former racehorses, staged in excess of 300 competitions or classes across 15 equine disciplines catering for all levels of ability from grassroots to elite, and provided a safety net and care for any thoroughbreds in need of charitable support.

Freedman said: “I am delighted to be taking over as Chair of Retraining of Racehorses. As someone who has spent much of their life working with horses and within the racing and breeding industries, I recognise the importance of ensuring that the horses we breed and train for racing are also provided with a fulfilling second career.

“Under Paul’s stewardship RoR has made considerable progress and become a highly respected organisation throughout the wider equestrian world and with fellow equine welfare charities. I am looking forward to building on that progress and working with the Horse Welfare Board to help them deliver the industry’s welfare strategy.”

Roy added: “It has been a great honour to Chair ROR for the past seven years, and I’m proud of the progress that has been made to improve the welfare and aftercare of thoroughbreds.

“I wish Philip, the trustees and the team the best of luck as they look to ensure that through the work of ROR, British racing remains a world leader in the aftercare of retired racehorses.”

The son of New Approach, who was last seen winning the Group 2 Grand Prix de Deauville by six and a half lengths, would have been sure to appreciate the testing conditions at Longchamp.

Morrison told the Racing Post: “He’s just not right this morning so we are not going to run. It’s a pain in the backside, but that’s racehorses for you.

“He did a breeze and we just weren’t happy with him. We know our horse and there’s just no point going all the way to France for a race of that quality in the circumstances.

“I get over these things very quickly – I go into total gloom for an hour or and then move on – but it’s much worse for the owners and of course for the lads who look after him, who put everything right into the job and then blame themselves when the horse isn’t right.

“He’s got lots of options, but he has wonderful pedigree and great form, and he’d make a lovely stallion. We’ll see what comes around.”

Enbihaar retried due to minor injury

Shadwell’s high-class staying mare Enbihaar has been retired from racing after suffering a minor setback that means she will miss the Group 1 Prix de Royallieu at Longchamp on Saturday.

Angus Gold, Racing Manager to owner Sheikh Hamdan Al Maktoum, said: “Enbihaar will miss the Royallieu as she is currently at Shadwell Stud. She had a minor injury, and as a result has been retired – very sadly.

“She’s been an absolute star, and I wish we had a few more like her – with her enthusiasm and ability. It was sad not to win a Group 1. But she did very well to win what she did, and she was a real torch-bearer for us for the last few years.

“She was beautifully trained – I must say that. It’s very sad, but it was fantastic to keep her in training this year to win a couple more Group races. She’s given us a lot of fun, and obviously we’ll give her a proper chance at stud.” 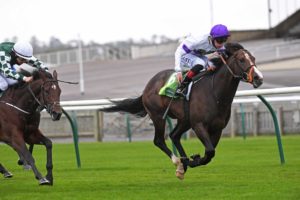 Up Next
Cox and Kirby combine to land Middle Park Stakes