European imports excelling down under
Stories

Frankel is prepared for his gallop at the Rowley Mile

Frankel made what could be his penultimate appearance in public on Wednesday morning when stretching out on the Rowley Mile at Newmarket ahead of a likely finale to his extraordinary racing career at British Champions’ Day on October 20.

Sir Henry Cecil arrived at the course with his wife Jane and Prince Khalid Abdullah’s Racing Manager Lord Grimthorpe just ahead of the horsebox carrying his unbeaten star. In one slight change to routine, Frankel was accompanied by Midday’s half-brother Midsummer Sun rather than his brother Bullet Train, with whom he is usually seen at the head of the Cecil string.

Incredibly calm and relaxed in front of a decent crowd of onlookers which included Frankie Dettori, Frankel walked quietly around the car park as his regular work rider Shane Fetherstonhaugh and jockey Tom Queally received their riding instructions.

With Queally being in the rare position of leading Frankel on Midsummer Sun, the pair eased into their gallop along Newmarket’s straight mile with Fetherstonhaugh asking his mount to pass his stablemate just after the halfway stage. Frankel responded with his customary breathtaking turn of foot to cruise 20 lengths clear of Midsummer Sun.

Declaring himself to be happy with Frankel after what was a “routine gallop”, Lord Grimthorpe said: “He worked well within himself and we’re all really pleased.”

As Ascot gears up for Britain’s richest raceday, it was confirmed that Frankel’s swansong will be watched in person by Her Majesty The Queen who will be present at QIPCO British Champions’ Day. 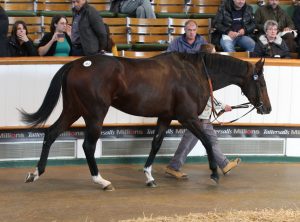 Up Next
European imports excelling down under