Frankel is the ROA Horse of the Year

The 30th annual ROA Horseracing Awards dinner was celebrated in style with more than 600 guests packing the Park Lane Hilton in London to see Frankel named ROA/sportingbet.com ‘Horse of the Year’ in a poll of ROA members.

The unbeaten superstar’s owner/breeder Khalid Abdullah was named ‘Owner of the Year’ for the second consecutive year, while Frankel also claimed the prize for ‘Three-year-old Colt’.

Accepting that award on his behalf, trainer Sir Henry Cecil said: “Frankel’s sorry he can’t be here tonight but he’s looking forward to seeing you all next year.” 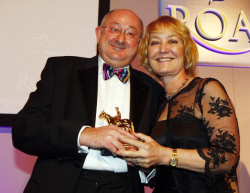 July Cup and Sprint Cup winner Dream Ahead, who has been retired to Ballylinch Stud in Ireland, was named ‘Outstanding Sprinter’ and Ascot Gold Cup and British Champions Long Distance Cup victor Fame And Glory the ‘Outstanding Stayer’.

A special presentation was made to ROA Chief Executive Michael Harris, who retires at the end of 2011, in recognition of his outstanding service to the association over the past 12 years. 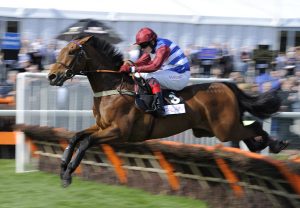 Up Next
Kumbeshwar joins elite club