He’s been the name on everyone’s lips ever since his juvenile days and two years after his retirement Frankel is still hogging the limelight, this time in the sales ring.

On Thursday, a weanling filly from his first crop set a new Irish record for a foal sale when being knocked down for €1.8 million to Dermot Farrington at the Goffs November Foal Sale. Frankel was aided in this landmark transaction by the dam of the filly, the dual Classic winner Finsceal Beo, whose current two-year-old, Ol’ Man River is one of the favourites for next season’s Derby.

The filly continued a dream run in the sales ring for her breeder Michael Ryan of Al Eile Stud, who sold Ol’ Man River as a yearling last year at Goffs for €2.85 million.
Micheal Ryan, who manages Al Eile Stud for his father, was understandably sporting a broad grin to light up the early evening fog following their prized filly’s turn in the ring.

He said: “We’re absolutely delighted with that – it was way more than what we thought she’d make.

“We’ve been box-walking all day waiting for this to happen. The mare’s been such a star for us and we wish the filly’s new owner the very best of luck with her.”

The Ryans will race Finsceal Beo’s current yearling, a filly by Frankel’s sire Galileo. Like her dam, she is to be trained in Ireland by Jim Bolger.

Four more Frankel foals – three colts and a filly – are set to come under the hammer this Friday at the Tattersalls December Foal Sale in Newmarket, including Lordship Stud’s half-brother to black-type winners Swiss Spirit, Swiss Diva and Swiss Dream, who sells as lot 1103 through New England Stud 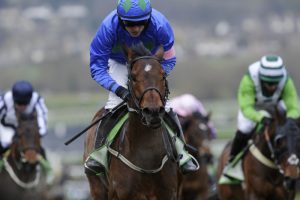 Up Next
Hurricane Fly soars to 20th Grade 1 victory