Just as Frankel gave cause for the Warren Place flag to be hoisted for the final time during Sir Henry Cecil’s admirable training career, his brother Noble Mission was responsible for it flying high again in Newmarket on Sunday when landing the Tattersalls Gold Cup at the Curragh to give Lady Jane Cecil her first Group 1 success.

“It’s the one thing I’ve really wanted ever since Henry died, to be able to raise the flag after a Group 1 winner,” said Lady Cecil. “It means so much for the team, who have all been through so much, and it’s wonderful for Noble Mission, too, he really deserves this.

“I’m so grateful to Khalid Abdullah for leaving him and Joyeuese with me and for continuing to support the stable. None of this would be possible without having good horses in the yard.”

Noble Mission’s top-flight victory came on the back of a Listed victory for his half-sister Joyeuse at Haydock on Saturday. The three-year-old daughter of Oasis Dream was recording her second stakes success and is one of four black-type winners for her dam Kind.

Headlined of course by the unbeaten champion Frankel, Kind’s talented offspring include Group 3 winner Bullet Train, her first foal by Sadler’s Wells, while Noble Mission, who, like Frankel is a son of Galileo, has really raised his game this season with three consecutive Group victories. Kind’s only other runner to date, Morpheus, won three times last season in England and is now in training in America with Bill Mott. 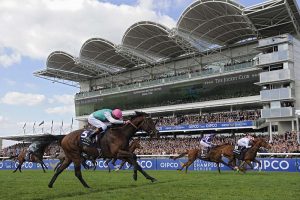 Up Next
Kingman bounces back for Guineas glory