What are your earliest memories of horseracing and how did an interest develop into a passion?

I remember sitting in the car outside Radlett Post Office on a Saturday lunchtime with my father while he filled in a betting slip before rushing in to get the envelope time-stamped and sent off before one o’clock. There were no betting shops in those days.

We’d then head home to watch the races on Grandstand and World of Sport. That marked the start of tipping competitions between ourselves. Form study soon took precedence over schoolwork and I was hooked.

How and when did you become involved professionally in racing?

I loved watching sport on TV, especially racing, and on leaving school after a relatively unsuccessful stab at O Levels (I wonder why!) I wrote to ITV asking if there were any vacancies. The timing was miraculously fortuitous as it coincided with the redistribution of the commercial broadcast franchises.

London Weekend Television was being set up and they were looking for a gofer to work on World of Sport. Jimmy Hill, the Head of Sport, and his deputy, John Bromley, took me on and May 1, 1968 marked the start of 44 enormously happy years in telly.

Brough Scott, who you would work with on Channel 4 Racing, recalls meeting you for the first time in the World of Sport studio in the early 1970s. What do you recall about those early days and how did your career in TV progress?

ITV struggled for sports contracts because the BBC, with two channels, was able to offer governing bodies so much more airtime. Finding sufficient events to cover on a Saturday afternoon was tough. But one sport with plenty to offer was racing and it was soon apparent that scheduling two meetings instead of one would provide the solution, hence the birth of the ITV Seven.

As the only member of the World of Sport production team with any real racing knowledge, my responsibilities grew and in time I became Programme Editor. I was also appointed ITV’s overall Executive Producer of Racing, a role I filled when Channel 4 Racing took to the air in 1984.

Your ex-colleague John Francome is on record saying: “Not one single person throughout the sport, from Richard Hannon to AP McCoy, is more passionate about racing than Andrew Franklin. And Channel 4 got the gig (with IMG) on the back of what Andrew achieved.” How disappointing was it to lose the Channel 4 contract after 28 years in the job?

John, characteristically, is being far too generous. But, yes, I love racing. Naturally, I was downcast about losing my job, but I wasn’t the only one and soon got over it. Of course, I’d have relished the challenges of the National and the Royal meeting, but it wasn’t to be.

What do you miss most? Are you still involved in racing?

The buzz of a live racing broadcast is irreplaceable. But the next best thing is going racing, particularly to my local course Sandown, where I am a director.

Prior to 2013, Channel 4 shared terrestrial racing coverage with the BBC. Was this competition a good thing for the sport and can Channel 4’s subsequent loss of viewers be put down, in part, to not having a rival to keep it on its toes?

Whether or not it was a good thing is debatable. Either way, Channel 4 was not keen to carry on covering racing minus the bulk of the crown jewels and the sport’s negotiators were obliged to respond. Had someone in racing been in possession of a crystal ball and foreseen the collapse in viewing figures of those meetings previously on the BBC, who knows what might have been. 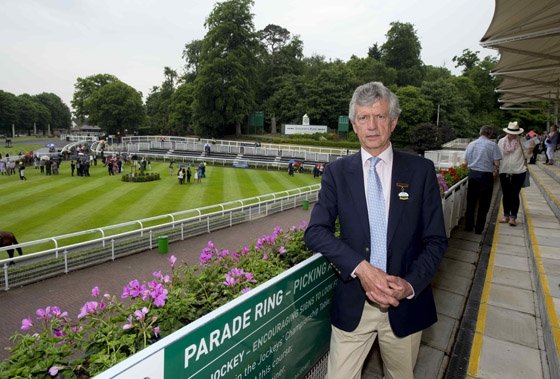 Andrew Franklin is on the board at Sandown

Do you think the BBC, or any other main channel, will be interested in showing horseracing again?

They may, but their interest would surely be confined to showing the crown jewels. Is there another high-profile broadcaster willing to schedule what’s left? I doubt it.

What has struck you most about the criticism of the current coverage of Channel 4 racing?

The slump in audience levels is down largely to a failure to empathise with the wishes of those watching. In any commercial walk of life knowing your customer is a cornerstone of success. The writing was on the wall within a couple of months of IMG taking over from Highflyer, yet either no one wanted to read it or there wasn’t the will, nor the skill, to take remedial steps.

The average audience for this year’s Derby programme was lower than Highflyer’s sign-off show from Newbury’s relatively low-key Challow Hurdle day at the end of 2012.

During your time as a broadcaster, what do you look back on with most satisfaction and what were your biggest achievements?

Helping Channel 4 win the Cheltenham contract, devising the Scoop6, winning a BAFTA, assisting with the conception of Racing UK and producing its debut broadcast were all hugely satisfying. But leading a happy workforce and getting the best out of them overrode everything.

And what are your biggest regrets?

No regrets. How can there be when I was so lucky for so long?

In all the years you ran Channel 4 Racing, can you name one moment that stands out as the most exciting, and one that was the hairiest on air?

The most exciting was Lester Piggott, ten days after emerging from his enforced period out of the saddle, swooping late on Royal Academy in the 1990 Breeders’ Cup Mile at Belmont.

The hairiest moment was wondering one year whether we would be able to squeeze in the Cesarewitch before our off-air time when one of the runners planted itself and had to be led most of the way to the start. We got the race in, by the skin of our teeth!

Channel 4 gave John McCririck a platform for three decades – then cast him aside. In hindsight, was he employed on TV too long, as many people think he was?

Mac’s role in the success of Channel 4 Racing cannot be overstated. When the channel decided to shrink his role they did so without adequate consultation with their viewers. It was an ill-informed decision. When they chose not to renew his contract their handling of the matter lacked class and sensitivity.

You were involved in the formation of Racing UK. What is the future of paid-for racing broadcasting? Will the association of RMG and ARC in a new pictures/data supplier have any impact?

I believe the sport is maximising its current potential income as never before and those responsible should take a bow. I can see the upside of an RMG/ARC alliance but, given the volume of racing, there would still be the requirement for more than one channel, albeit under the same production umbrella.

However, a limit to this maximisation of income is fast approaching because there is no sign of an upturn in racing’s public appeal. Picture rights fees are massively dependent on FOBTs.

I have to admit their presence makes me feel slightly queasy, but the sad fact is the wellbeing of our great sport needs them. Without the machines, the number of shop closures would soar and racing’s income would plummet.

What is your input as a board member of Sandown Park? And was the course’s promotion of AP’s ‘goodbye’ on his final day in the saddle a success in your eyes?

Like my colleagues, I attend most racedays and try to look at the workings of the course from the perspective of its patrons. I feed back my observations for Phil White and his management team to consider.

AP’s farewell day couldn’t have gone much better; a capacity crowd basking in lovely spring weather watching top-notch racing. The feelgood factor was off the dial.

Is there too much racing and are we becoming saturated with all-weather fixtures?

I am completely opposed to a further increase in all-weather fixtures. Although they play an important role, especially for smaller owners and trainers, in the main they are dull contests and will never rival the public attraction of races on turf.

There is scope for pruning across the board. There are far too many fields with fewer than six runners. This blight has been in evidence since 2008 yet it has taken seven years for something to be done. Even now progress is much too slow.

You are a trustee of the Bob Champion Cancer Trust. Does this involve you in racing in any way?

We are always on the lookout for fundraising ideas involving racing. The next is ‘An Evening with Nicky Henderson’ on Saturday, September 19. Owner & Breeder readers are very welcome!

How does racing fight its corner in the face of competition from the other leisure industries, football, tennis, rugby, cricket and motor racing?

Not well. Racing cannot bring itself to put the customer squarely in pole position. The other sports are constantly adjusting themselves in a bid to benefit the public. Racing – and I know this won’t play well with many who are reading this – persists in trying to appease the participants at every turn. The result is a failure to progress. Far too many now see racing as inscrutable and unexciting.

So the sport can either continue to do next to nothing and manage its decline, or it can reform. And by reform I mean radical changes, not fiddling around with the Flat jockeys’ championship, which is both unimaginative and ultimately unproductive.

You must have a favourite horse, jockey and trainer. Who are they?

I must confess this is a jaunt back in time. Rondetto is my all-time favourite horse. I’ve a soft spot for versatility and my hero was effective from two miles all the way up to four and a half miles of the Grand National, in which he finished third to Highland Wedding in 1969.

Sixpence each-way on Badanloch in the first televised Grand National in 1960 was my first punt. Second place produced a small profit and then it was downhill all the way after that.

Jockey and trainer were Stan Mellor and George Owen, and from that day on until they retired I was their most avid fan. I can still name dozens of horses they were associated with.

If you could change one thing in racing, what would it be and why?

Here’s another response, which, I guess, will get a cool reception. In sport, popularity is generated mainly by the level of excitement. Excitement is determined chiefly by the unpredictability of the outcome. Horses of varying ability carrying the same weight does not meet that criterion.

Solution: take an axe to black-type races. There may be too many races with small fields, but there are even more where there are insufficient runners with a perceived chance of winning. This is one of the reasons why racing is short of followers. 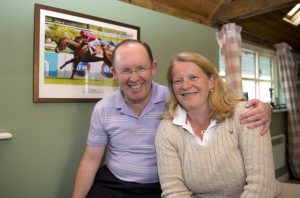 Up Next
Believe and Hope