Alan King continued his fine record in the Grade 2 Neptune Investment Management Winter Novices’ Hurdle as Messire Des Obeaux went on to secure a fourth victory for the Wiltshire-based trainer.

The early running was taken up by Aintree My Dream, with last year’s Cheltenham Festival Bumper winner Ballyandy tracking the leader under the recently returned Sam Twiston-Davies.

Ballyandy’s arch market rival Messire Des Obeaux sat on his heels on the inner in the familiar Simon Munir and Isaac Souede silks.

As the race heated up into the home straight, Ballyandy loomed up to the early leader but was immeadiately tracked through stylishly by the Nicky Henderson-trained Cultivator.

The duo came to the second last locked together with Messire Des Obeaux and Daryl Jacob a length and a half behind in third.

Switched to the outside before the last, the Alan King charge gathered up momentum staying on strongly up the hill to get the better of Ballyandy by half-a-length.

“They’ve just done me for toe between the second-last and the last,” reflected Jacob. “But he’s a gorgeous horse who stays well and when the going gets tough, he gets going.”

The Barbury Castle handler first took the prize with Junior in 2005, who subsequently went on to win the Kim Muir at the Cheltenham Festival for the Pipe’s. For King this becomes his third Grade 2 victory in the space of a month.

Sceau Royal, also owned by Munir and Soeude, and Yanworth gave him his other two at Wincanton and Ascot respectively.

King said: “He was very game. I thought between the last two he was going to run very well but finish third, but then he knuckled down well.

“That’s the first time he’s had a gun put to his head and he was giving 7lb to Ballyandy so it was a good performance. “I should think he’d be a bit better again on even softer ground as he likes plenty of juice. I wouldn’t be surprised if come March we’re looking at the three-miler.” 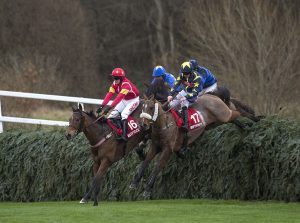 Up Next
Returning Brooke eyes Aintree