Lift off at Goodwood
Stories

For a fleeting moment in the home straight it looked as if Stradivarius’ bid for a record fourth Goodwood Cup would end in failure. But once manoeuvred out by jockey Frankie Dettori, the six-year-old powered home to land the Group 1 on Tuesday.

Much of the build-up to the race had surrounded the challenge that Irish Derby hero Santiago posed the reigning champion, as the son of Authorized was receiving 15lb from Stradivarius.

As Nayef Road set the fractions, Dettori had Stradivarius settled in the pack, tracking the leader and Santiago, who was racing keenly under Ryan Moore.

When the field entered the home straight there were nervous moments, with Stradivarius and Dettori boxed in by a wall of horses. As Dettori dropped lower in the saddle and began rousting his mount, a gap opened up in front of them.

From there, Stradivarius reeled in both Santiago and Nayef Road to secure a length victory in the two-mile event.

Dettori said: “What a horse. Giving away that weight, everybody rode to beat me, and he still gets out and wins. What can you say? He’s an amazing horse.

“What he’s done is break records. To go from a superstar mare like Enable to an absolute champion like this horse in three days is the stuff of dreams.

“I knew I had a good partner and I just had to be patient. When you’ve got a good horse, a gap will come. I’ve been in that position before and it’s not nice to be in that position, but he got out and he won.”

Trainer John Gosden added: “He has been in tremendous form since Royal Ascot. He ran in the Coronation Cup and he ran brilliantly and obviously the Gold Cup before this, so he is going to have a freshen up now.

“I knew he was in very good order, but I think it is something like this where Frankie wanted to wait and pounce rather than get in a slogging match from three and a half, two furlongs down. Once he has gone and won, he is quite clever now and thinks he has done his job, so you can’t get there too soon as he pulls himself up, like he did last year.

“The owner [Bjorn Nielsen] wants to go a different route with him now. Obviously, the Weatherbys Hamilton was a fantastic £1 million bonus which they have put on for two years running so he would have gone for the Lonsdale Cup at York, but that bonus doesn’t exist anymore.

“So instead, he would like to freshen him up, give him a nice holiday and go for the Prix Foy at Longchamp in September. If he runs a nice race there and handles the track and everything, then he will run in the Prix de l’Arc de Triomphe.”

Having struck in the Listed Chesham Stakes at Royal Ascot last month, the Aidan O’Brien-trained Battleground followed up that success with an impressive win in the Group 2 Vintage Stakes.

The youngster is by Claiborne Farm’s War Front and out of three-time Group 1 heroine Found.

O’Brien said: “This was Battleground’s first run after Ascot; we were very happy with him at home and we thought it was a lovely race for him to get experience from. The ground was lovely and safe and Ryan was very happy with him.

“We think his next run will be the National Stakes, everything being well, but he is a horse we have always loved. He is a big, powerful horse and very genuine, and that’s the way his dam was as well.

“We think he will be a miler, probably. He is a strong traveller, but he is by War Front, and being out of Found we thought he might get a mile and that is what we would be hoping for.

“Obviously all the two-year-olds got a little bit messed up with the start of the season not being there, and then we had to rush some of them to get them to Ascot. A lot of stuff wasn’t ideal, but he was lovely.

“It is very early for horses yet; an awful lot will come out, and some will improve, some will stand still, and some will go back. But we are delighted with this horse.”

The Group 2 Lennox Stakes went the way of the Charlie Appleby-trained Space Blues, who got the better of Duke Of Hazzard by two lengths. 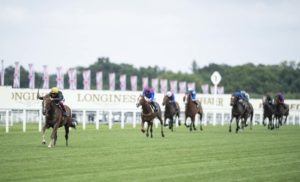 Up Next
Lift off at Goodwood